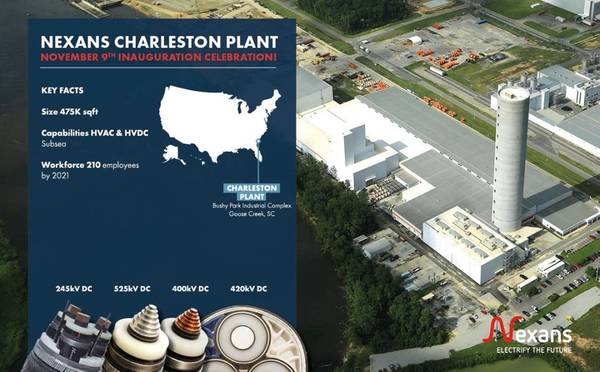 “It will support the rapidly expanding US offshore wind market, with potential growth of 13% annually by 2030, generating up to $70 billion of capital investment and add 20 GW of power per year, according to International Energy Agency (IEA),” Nexans said this week of its new facility.

“The Charleston high voltage subsea plant is part of the comprehensive supply chain that is being developed to support offshore wind. At the end of 2021, Nexans will have created over 200 new jobs for the offshore wind industry,” the company said.

Earlier this year, Empire Offshore Wind, an offshore wind joint venture between Equinor and BP, selected Nexans as a preferred supplier to connect the Empire Wind offshore projects in New York to the onshore grid.

The turnkey projects cover the full design and manufacturing, as well as the laying and protection of over 300 km of export cables that will deliver electricity to over one million homes.

Nexans plans to use its recently delivered Nexans Aurora vessel for offshore operations at the project.

Empire Wind is being developed by Equinor and BP through their 50/50 strategic partnership in the U.S.

Empire Wind is planned for an area of 80,000 acres, in federal waters, an average of 33 km south of Long Island, east of the Rockaways.

Two cable systems will connect the offshore substation for Empire Wind 1 to landfall and substation in Brooklyn, New York. In contrast, Empire Wind 2 will link to Long Island by three parallel cables.