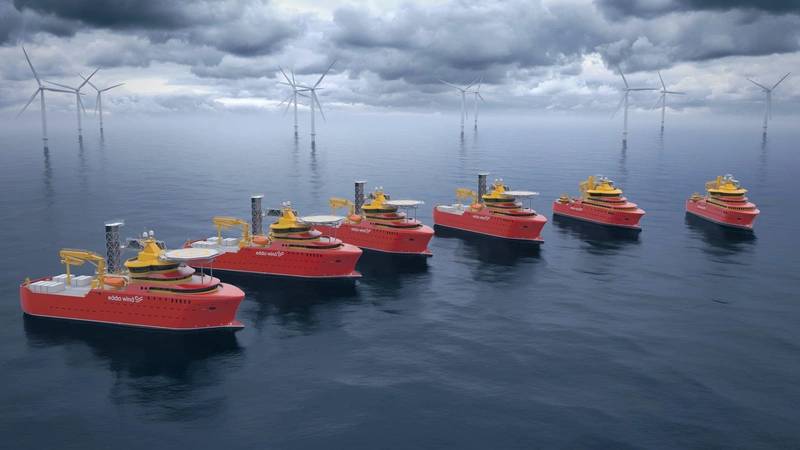 Offshore wind vessel company Edda Wind, owned by Wilhelmsen and Østensjø, on Monday announced plan to launch an offering of shares in the company and to apply for a listing on the Oslo Stock Exchange (the “IPO”).

For vessels under construction, Edda Wind has secured two long-term contracts with Ocean Breeze and Vestas Offshore Wind UK Ltd, with terms until 2032 and 2037, respectively, as well as a firm two-year contract for a third newbuild at the Dogger Bank offshore wind farm in the UK. Edda Wind has a contract backlog with a firm period of EUR 292 million, options period of EUR 145 million and a firm contracted revenue base of EUR 35 million for 2023.

Edda Wind said that the IPO would comprise an offering of new shares in the company, expected to raise gross proceeds of NOK 875 million (around $102,8 million.)

“The IPO will support the Company’s position as the leading provider of purpose-built vessels for the offshore wind industry and support financing of the Company’s current newbuilding program as well as facilitate for accelerated growth. The Company is currently in the process of evaluating further newbuild opportunities in order to capitalize on the ever-increasing demand for top-tier C/SOVs as the industrialization of offshore wind unfolds,” Edda Wind said.

The company said that three cornerstone investors have undertaken to acquire shares for a total amount of NOK 465 million (around $54,6 million) in the IPO, subject to certain conditions, and for price per share of up to NOK 30.75, which equates to a pre-money equity value of NOK 1,015 million based on the current number of shares outstanding.

The three cornerstone investors are i) Geveran, a company indirectly controlled by trusts established by John Fredriksen (NOK 200 million committed), ii) Xclat, a subsidiary of the Quantum Pacific Shipping group associated with Idan Ofer (NOK 200 million committed), and iii) Nordea Investment Management (NOK 65 million committed). Geveran and Xclat will both join the Board of Directors in the company, with effect from the first day of trading on the Oslo Stock Exchange, and take an active role in the further development of the company, Edda Wind said.

Kenneth Walland, CEO, comments: “Being an early mover when it comes to delivering purpose-built vessels for offshore wind farm operations, Edda Wind has already gained a solid track record of excellence in the offshore wind industry. The company has carried out advanced and important projects both in the commissioning- and O&M market and by that created a solid reputation and built strong relations with the major charterers in these segments.

“The offshore wind market is fast-moving, capital intensive and requires significant investments. With three new cornerstone investors and an IPO securing a solid foundation for future growth, Edda Wind will get an even stronger backing and necessary support to capitalize on the huge market potential we see ahead. This will enable us to continue our journey towards becoming a world-leading provider of offshore wind services together.”

Håvard Framnes, Chair, said:”Combined, Edda Wind’s main owners, Østensjø and Wilhelmsen, have more than 200 years of offshore and maritime experience. We draw on Østensjø’s experience in operating advanced offshore service vessels, including gangway personnel transfers, combined with Wilhelmsen’s significant presence across the maritime value chain, to create a company with a unique potential in a fast-growing market.”

Geveran and Xclat will further broaden the international network and strengthen the shipping competence and experience of the Company. Edda Wind will have an unmatched global position for further growth and value creation.”