U.S. oil and gas companies on Friday raced to complete evacuations from offshore Gulf of Mexico platforms as Tropical Storm Ida advanced towards oilfields that provide 17% of the nation’s oil production.

The storm early Friday was about 50 miles northwest of Grand Cayman Island moving north at 15 miles (24 km) and expected to intensify and become near a major hurricane when it hits the central U.S. Gulf Coast this weekend, according to the National Hurricane Center (NHC). A major hurricane packs winds of at least 111 miles (178km) an hour.

Oil prices rose early Friday and are on track to post big gains for the week on worries over supply disruptions. U.S. Gulf Coast gasoline prices also climbed this week because of concerns about the storm, traders said. 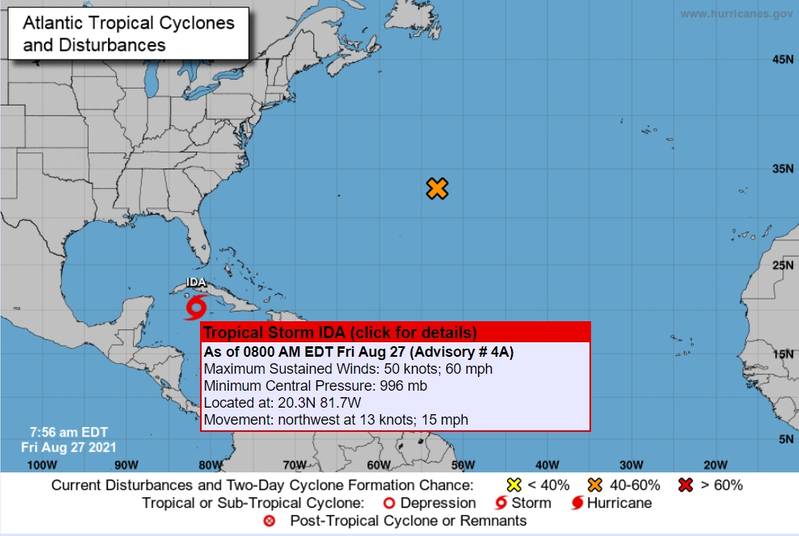 Over 45% of U.S. refining capacity lies along the Gulf Coast.

Louisiana’s governor called on residents to prepare for a major storm, and declared a state of emergency that allows him to bring additional aid to the state. Five storms made landfall in Louisiana last year causing billions of dollars in damage.

Ida is forecast to become a strong category 2 or a category 3 hurricane according to weather forecasters. A path over the Gulf’s ultra warm waters will intensify the storm and lead to flooding rainfall, forecasters said.

“Water temperatures are 85 degrees to 88 degrees Fahrenheit (29-31 degree Celsius), that’s anomalously high, 3 to 5 degrees higher than it normally would be,” said Jim Foerster, chief meteorologist for DTN, which provides weather advice to oil and transportation companies.

Parts of Louisiana, Mississippi, and Alabama could expect 8 to 16 inches (20-40 cm) of rain by Monday, with up to 20 inches in isolated areas, The storm could bring a life-threatening tidal surge, damaging winds, in addition to the heavy rainfall to coastal areas by Sunday and Monday, the NHC said early Friday.