Opinion: Why Explorers are Not Targeting More Gas in Response to Energy Transition

There has been much talk about natural gas as a transition fuel, primarily in helping to lower emissions and pollution by displacing coal in power generation, but also in complementing intermittent renewables, and targeting the (blue) hydrogen economy in the longer term.

Forecasters of energy demand, such as the IEA, tend to project gas demand holding up for longer than oil, and a number of E&P companies include natural gas as a core part of their energy transition and net-zero emissions strategies. Is there any evidence that explorers are now targeting more gas in exploration?

Not yet. In fact, 2021 is expected to see the lowest proportion of high-impact exploration wells targeting gas in more than a decade.

Figure 1: Left & Center – High impact wells drilled annually for 2011-2020, and a projection for 2021. The phase target is as reported by the company or interpreted by Westwood. Right – High impact discovered resource 2011-2019 and 2020, and the risked estimate for high-impact wells expected in 2021. Source: Westwood Wildcat Service.

Overall, 32% of high-impact wells targeted gas prospects in 2011-2019. The highest proportion was in 2019 when ~45% of high-impact wells targetted gas. This was due to drilling campaigns by BHP in deepwater Trinidad, BP in MSGBC and Exxon/Eni in the Eastern Mediterranean. There were also slight increases in 2014 and 2015 as East Africa was drilled out, however, oil has remained the primary target throughout the period accounting for two-thirds of high-impact exploration wells.

2020 saw a number of, primarily European, E&P companies change their strategy in response to the energy transition (see Westwood infographic here) – including commitments to reduce emissions from combustion of their products (Scope 3), and emphasizing the role of natural gas.

These changes in strategy have, however, yet to be reflected at the exploration drillbit. In 2020, 71% (52) of high-impact wells targeted oil prospects, with the focus on offshore Brazil, Suriname-Guyana, the Norwegian Barents, and the US Gulf of Mexico.

Only the Nile Delta saw more than three high-impact wells targeting gas. Westwood is projecting that 2021 will see even more focus on oil prospects, with ~83% of wells expected to target oil. Hot spots for oil exploration will be Mexico’s Campeche Salt Basin (>10 wells), Brazil’s pre-salt (5-6 wells), Suriname-Guyana (>10 wells), and the North Sea (>5 wells). Gas/gas condensate exploration will be concentrated in the Levantine Basin of the Eastern Mediterranean, Myanmar’s Rakhine Basin, and the South Caspian.  All are either close to local gas demand centers or have existing routes to market with available capacity. 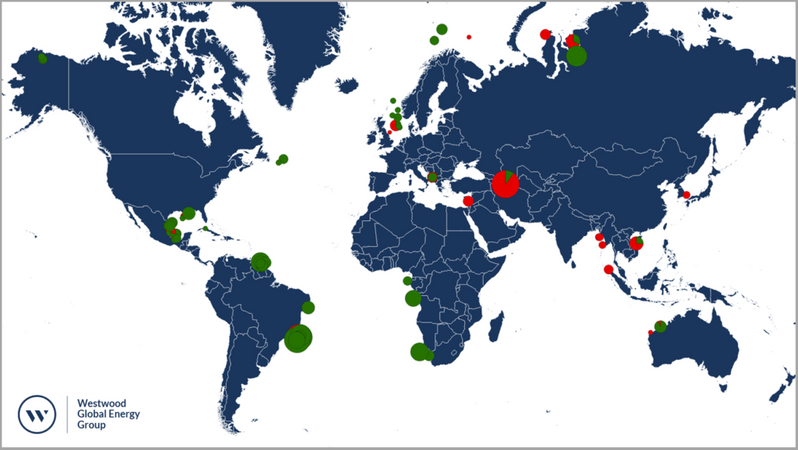 There is no evidence in 2021 drilling plans that explorers are targeting more gas either. Westwood estimates that 71% of the risked resource being drilled out in 2021 is oil, the second-highest proportion in the last decade.

So why is gas exploration not proving more popular during the energy transition?

Firstly, most of the world’s E&P companies have not yet committed to reducing their scope 3 emissions, and are therefore not specifically targeting natural gas exploration as part of an energy transition strategy.  The focus is still on near-term targets of reducing Scope 1 and 2 (operational) emissions to maintain a licence to operate.

Secondly, more than 60% of the discovered resource in 2012-2020 was gas, even though ~70% of high-impact wells were targeting oil. This was due to a number of giant gas discoveries, as well as the industry discovering gas in plays where oil was the primary target.

In fact, the industry has already found more natural gas than it needs or can commercialize in current market conditions.

Around 36 bnboe of gas discovered 2008-2016 remains in the ground with no current plans for development. The exploration for gas that is happening now is focused on plays where the route to market is clearer, but big gas prospects with access to an attractive gas market that can be commercialized quickly are hard to find.

Until this equation changes, explorers will still tend to favor oil.