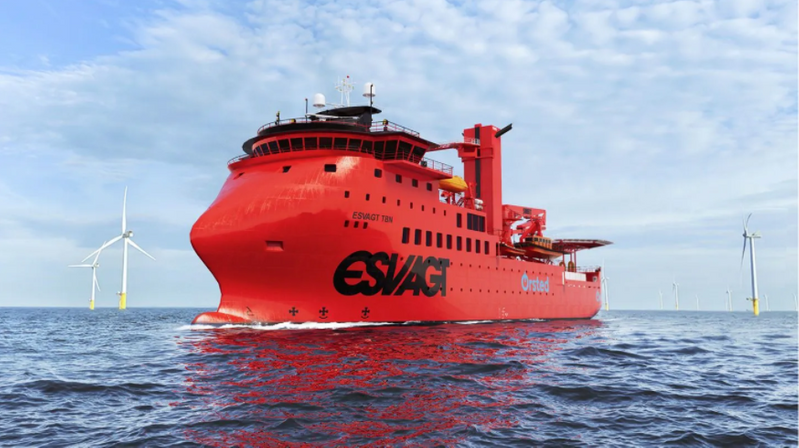 Offshore wind developer Ørsted and vessel owner Esvagt on Friday announced an investment in what they claim to be the world’s first service operation vessel (SOV) that can operate on green fuels.

“The SOV will be powered by batteries and dual fuel engines, capable of sailing on renewable e-methanol, produced from wind energy and biogenic carbon, which will lead to a yearly emission reduction of approx. 4,500 tonnes of CO2,” Esvagt said.

“The maritime sector urgently needs new green fuels, which today come at a higher cost than the fossil-based alternatives. By ordering the new SOV, Ørsted and ESVAGT are showing their commitment to a green maritime sector and helping create the needed demand to accelerate to cost reductions of green fuels for the maritime industry. The investment decision also sends a clear signal that the future for both service and installation vessels is green. For the new SOV, Ørsted intends to supply the e-methanol,” Esvagt said.

“An offshore wind farm already has 99% lower emissions than a coal fired power station, seen over the entire lifetime of the asset, including production, construction, and installation. Today’s announcement between ESVAGT and Ørsted will be a step on the way towards mitigating the remaining emissions,” Esvagt said.

Esvagt will start building the vessel in the second quarter of 2022. Once commissioned by the end of 2024, the SOV will start servicing the 1.3 GW offshore wind farm, Hornsea 2, off the UK’s east coast.

Mark Porter, Head of Offshore Operations at Ørsted, says: “As the world leader in offshore wind, it’s natural for Ørsted to take the lead in driving out fossil fuels from the industry. We’ve set clear targets and a clear direction towards net-zero emissions, and this new methanol-powered SOV is a tangible proof of our clear commitment to realize these targets. The agreement with Esvagt checks many boxes for us, as it both helps decarbonize our offshore operations while also demonstrating our strong belief that green fuels based on renewable energy is the most viable solution to create a green maritime sector.”

The vessel will be 93 meters long, with a breadth of 19.60 meters, a maximum draught of 6,5 meters, and a speed of approximately 14 kts. It will be able to accommodate 124 persons. Esvagt did not say where the vessel will be built. The commercial details were not shared either.

As Esvagt puts it, servicing an offshore wind farm takes a great deal of effort and is handled by a highly specialized team of service technicians that are often offshore for weeks at a time. Because fo this, during their stay offshore, the technicians live on a Service Operation Vessel (SOV), which also hosts an onboard workshop and much of the equipment and spare parts needed to service an offshore wind farm.

Describing the design of the SOV it will build as part of the agreement with Ørsted, Esvagt said: “The SOV is designed for comfort and high workability, providing a highly efficient workspace and safe transfer of technicians at the wind farm via a motion-compensated gangway and transfer boats as well as a crane to lift heavy spare parts.

“As a floating home, it also offers recreational activities for the on-board crew and technicians, including fitness facilities, a game room, a cinema, and individual accommodation. The SOV is also equipped with a helipad for fast access and transfers from shore.”

Esvagt did not respond to Offshore Engineer’s email seeking more details on the contract terms and value, and on who the shipbuilder will be.