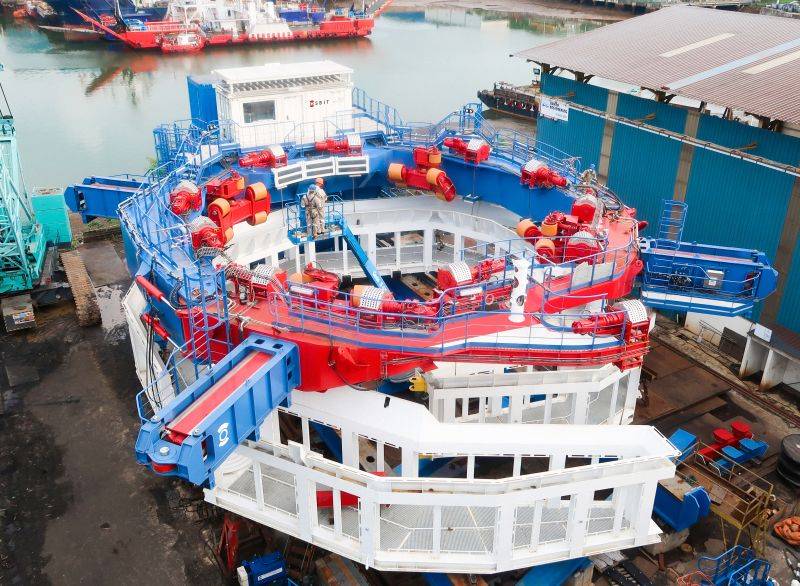 The system will be used to support installation activities on Yunlin Offshore Wind Farm. Once completed, the farm will produce 2.4 terawatt hours of renewable energy per year, supplying enough renewable electricity to meet the power needs of 605,000 households annually.

The Osbit-supplied system is enabling monopile installation from a moored floating vessel and is designed to handle some of the largest monopiles in the world. It is deployed and stowed using a deck rail skidding system and is used to maintain the position and verticality of the monopile foundations, Osbit said.

The gripper design is adaptable for future projects, accommodating monopiles between 6.5 to 10 meters in diameter, with push forces up to 300 tonnes. The system has also been designed for rapid mobilization and can be adapted to suit different vessel structures, Osbit said.

According to Osbit, the system includes an integrated Near Pile Noise Mitigation system, which minimizes the subsea noise and vibration associated with piling activities. This is complemented by bubble curtain rings which are deployed to dampen the energy emitted into the environment and further protect marine life, Osbit said.

According to Osbit, the pile gripper will now be mobilized onto the DLS-4200 vessel and will be deployed in the coming months. It will be used in conjunction with an upending hinge, which is also being delivered by Osbit.

The DLS-4200 is a self-propelled derrick lay vessel, developed by Ulstein, and built for UAE-based National Petroleum Construction Company by China’s ZPMC.

Tim Benjamin Kühl, responsible Project Manager for the procurement of Installation Tools, adds: “We are pleased to take over the Gripper from Osbit, who did a great job along this project, and we are really looking forward to see the new built equipment in operation this year. Thanks to Osbit and their supply chain for managing all the challenges during these complicated times.”

The start-up of power generation from the first turbine of the Yunlin offshore wind farm in Taiwan was achieved in November 2021.

The Yunlin offshore wind farm will have a capacity of 640 megawatts (MW) from 80 turbines of 8 MW.