Brazilian national oil company Petrobras has launched a teaser for the potential sale of its interests in Albacora and Albacora Leste deepwater offshore blocks in Brazil.

Petrobras said that with combined OOIP and production of 8.2 Bboe and 77 Mboe/d, the assets represent “a material, operated production hub with substantial post-salt revitalization and pre-salt development projects.”

Albacora, in water depths ranging from 100 to 1,050 meters, was discovered by Petrobras in 1984. First production started production in 1987. The current production at the field is around 43 Mboe/d.

For Albacora, Petrobras says there’s a planned field revitalization project which holds the potential to more than triple production from current levels. 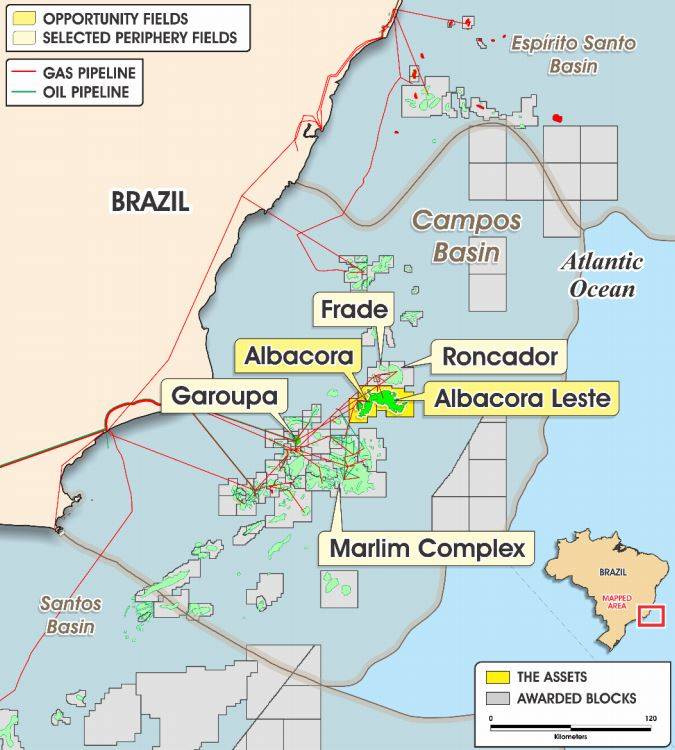 Albacora Leste, located in the northern area of the Campos Basin, in water depth ranging from 1,000 to 2,150 m, was discovered by Petrobras in 1988. First oil started flowing in 2006 and the current production of 34 Mboe/d.

Petrobras has also said that upcoming drilling and work-over activities at the Albacora Leste are projected to increase near-term production and sustain extended production plateau.

Active field infrastructure includes the P-50 FPSO with an oil processing capacity of 180,000 bbl/d and 6 MMm³/d of gas. Oil is offloaded through shuttle tankers and gas is exported through the neighboring PNA-1 platform.

As for the potentially interested oil companies, to be able to take part, they need to have an equity market capitalization or net worth of at least US$500 million. Any interested financial institutions need to manage funds valued at least $2.5 billion.

Petrobras said that interested parties need to formally notify Scotiabank of its interest by October 16, 2020.

The Brazilian oil company said the potential sale was in line with the portfolio optimization strategy and the improvement of the company’s capital allocation, increasingly concentrating its resources in deep and ultra-deep waters, “where Petrobras has demonstrated great competitive edge over the years.”

In a Linkedin post on Friday, energy intelligence firm dubbed the assets on sale as “one of the world’s most attractive acquisition packages on the market.”

“These adjacent assets are two of the largest post-salt assets in the Campos Basin (combined ~80 kboe/d), both with material redevelopment potential and pre-salt upside. Interest in this opportunity will be high, particularly given Petrobras is exiting – there will be multiple suitors,” Welligence said.