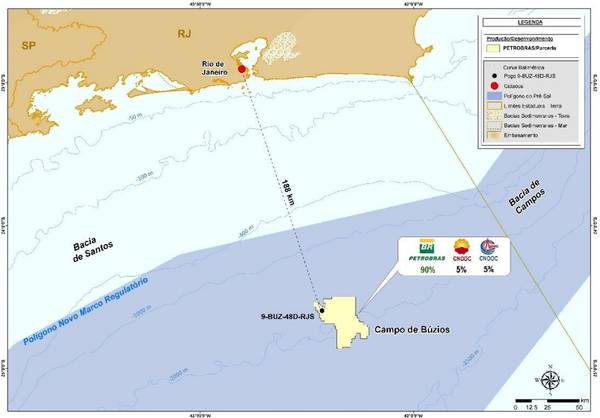 Brazilian oil firm Petrobras has said it has confirmed oil of excellent quality with the drilling of well 9-BUZ-48D-RJS, located in the extreme northwest of Búzios field in the Santos Basin, offshore Brazil.

The well is located 188 km from the city of Rio de Janeiro and was drilled at a water depth of 1,850 meters. Tests carried out from 5,540 meters depth confirmed the presence of oil reservoir of excellent quality.

“The discovery reinforces the potential of the pre-salt in Búzios field,” the company said,

Petrobras is the operator (90%) of the Búzios field consortium, in partnership with CNOOC (5%) and CNODC (5%).

The company has recently started talks with Dutch SBM Offshore for what will be the sixth FPSO at the giant Buzios offshore oil field.

The FPSO, to be named Almirante Tamandaré, would start-up in the second half of 2024, and would be the largest oil production unit operating on the Brazilian coast and one of the largest in the world, with a daily processing capacity of 225 thousand barrels of oil and 12 million m3 of gas.