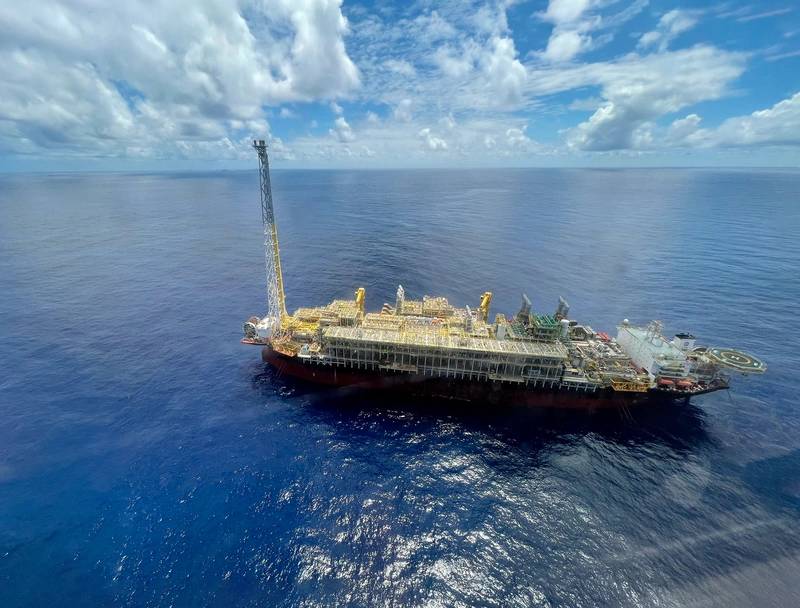 Oil and gas production has started from FPSO Guanabara offshore Brazil, the first definitive production system installed in the Petrobras-operated Mero field, in the Santos Basin pre-salt. Three more FPSOs are planned for deployment at the Mero field.

The Mero field has been in pre-production since 2017 with the 50,000 barrels of oil per day Pioneiro de Libra FPSO.

The Guanabara FPSO is capable of processing up to 180 thousand barrels of oil and 12 million m3 of gas, which represents 6% of the production operated by Petrobras, contributing to the company’s expected production growth.

Mero is the third biggest pre-salt oil field behind only Búzios and Tupi. The FPSO, built and operated by Modec, arrived at the Mero field in late January 2022.

Following the arrival, the 332 meters long FPSO Guanabara was connected to wells and subsea equipment and underwent final tests before starting production.

In the first batch, six producing wells and seven injectors will be connected to the FPSO. The FPSO is expected to reach peak production by the end of 2022.

“This development will continue with the addition of three FPSOs in the coming years, all already under construction, which will deliver products of more than 650,000 barrels of oil equivalent per day in  2026. With large resources and a well productivity amongst the best in  the world, this development illustrates TotalEnergies’ strategy of  focusing on low cost, low emissions assets.”

The FPSO is located more than 150 km off the coast of the state of Rio de Janeiro in water depths of up to 1,930 meters.

The FPSO Guanabara has gas re-injection systems, where the gas production with 45% carbon dioxide (CO2) content, after self-consumption in the FPSO, will be all re-injected into the reservoir to maintain pressure and improve oil recovery, in addition to reducing the release of CO2 into the atmosphere.

“Additionally, the Mero field is developing an unprecedented technology to separate, on the seabed, CO2-rich gas from oil for reinjection from the seabed, reducing the amount of gas reaching the FPSO, thus increasing the FPSO’s availability to oil and the project’s efficiency,” Petrobras said.

“The Mero 1 project is part of one of the most robust CO2 capture, use and geological storage programs in the world – called CCUS. These initiatives are aligned with Petrobras’ commitment to reduce carbon intensity in the Exploration & Production area by 32% by 2025,” Petrobras said.