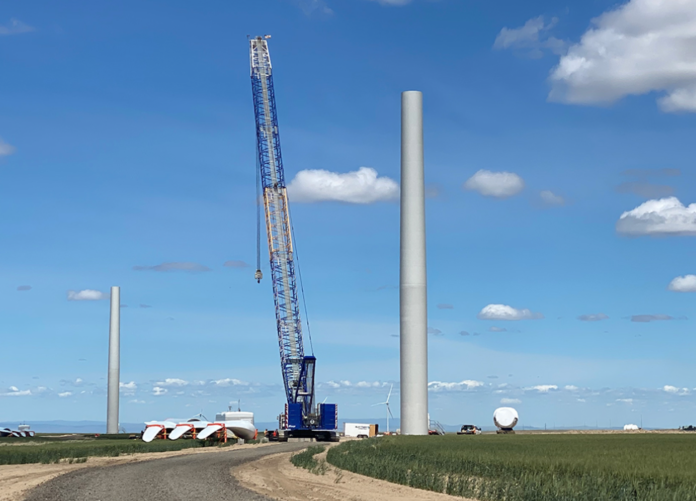 Wheatridge is a joint project of PGE and a subsidiary of NextEra Energy Resources LLC. The new facility marks a milestone in Oregon’s acceleration to a clean energy future and will play an important role in achieving PGE’s recently established company-wide goal of net-zero greenhouse gas emissions by 2040.

“Customers want and expect cleaner energy sources,” says Maria Pope, president and CEO of PGE. “This is an exciting step toward the completion of this important resource and adds to our growing wind generation portfolio. We deeply appreciate the partnerships that make the Wheatridge project possible, with NextEra and with the transmission services teams at the Bonneville Power Administration and Umatilla Electric Cooperative.”

Wheatridge will be one of the first large-scale energy facilities in the U.S. to combine wind, solar and battery storage resources at a single location. The 300 MW wind farm is now complete and delivering power to PGE customers. The 50 MW solar and 30 MW battery facilities will be completed by the end of 2021.

With the addition of Wheatridge’s wind farm, PGE’s wind generation portfolio now totals more than 1 GW nameplate capacity, available from five owned or contracted wind farms in the Northwest. When complete, the solar and battery storage facilities will be among the largest in Oregon.

Up to 300 jobs were created at Wheatridge during construction of the wind farm. Up to 175 workers will be employed to build the solar and storage sites. Approximately 10 full-time employees will operate the combined facilities once all three components are fully commissioned for service.

Power from the project will reach PGE customers in Portland and the north Willamette Valley via a new transmission line, constructed by Umatilla Electric Cooperative, that connects Wheatridge locally with the Bonneville Power Administration’s regional high-voltage grid.

PGE expects to invest approximately $155 million for its owned portion of the project.