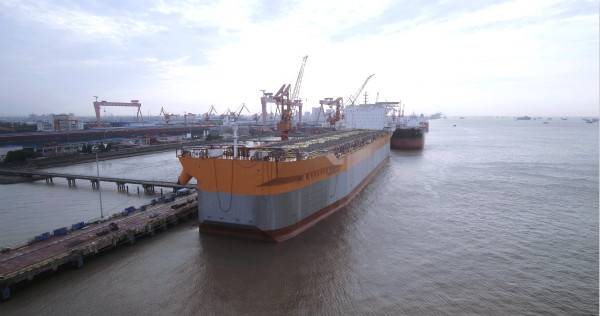 Following the delivery of the Liza Unity hull in late 2019, SWS on Monday delivered the Liza Prosperity hull, the second hull built under SBM Offshore’s Fast4Ward standardized-FPSO-hull program. The construction of the FPSO Prosperity hull started in January 2019.

The FPSO Prosperity is expected to be deployed at ExxonMobil’s Stabroek block offshore Guyana, as part of the Payara oil field development. SBM Offshore won a FEED contract for the project in late 2019.

Subject to government approvals in Guyana, project sanction, and an authorization to proceed with the next phase, SBM Offshore will construct, install and then lease and operate the FPSO for a period of up to 2 years, after which the FPSO ownership and operation will transfer to Exxon.

The FPSO will be able to produce 220,000 barrels of oil per day, will have an associated gas treatment capacity of 400 million cubic feet per day and water injection capacity of 250,000 barrels per day.

It will be spread moored in a water depth of about 1,900 meters and will be able to store around 2 million barrels of crude oil.

The second FPSO Liza Unity is on target to achieve first oil in Guyana in 2022. The Liza Unity will have a 220,000 bopd per day capacity. The FPSO is currently in dry-dock in Singapore where work is progressing on the integration of the mooring system and the preparation for the lifting and integration of the first topside modules.

The Prosperity, the hull of which was delivered on Monday, will be Guyana’s third FPSO. Hess, Exxon’s partner in the Stabroek block off Guyana, recently said that the Payara might see a potential delay in the first production of six to twelve months beyond the initial start-up target in 2023.