Polish gas transmission system firm Gaz-System said Thursday that preparations were underway for the pipelaying work to begin on the Baltic Pipe project, designed to ship gas through a Baltic Sea pipeline from the Norwegian part of the North Sea to Denmark and Poland.

“Onboard the three vessels responsible for the construction of Baltic Pipe, final preparations are being made before they set sail and begin laying the gas pipeline in the Baltic Sea,” Gaz-System said.

Baltic Pipe is in the construction phase in the onshore and offshore part of the project.

In April this year, Gaz-System said, drilling of a tunnel for the gas pipeline on the Polish coast began. Similar work in Denmark will also start soon, it sad.

“Since last year, research vessels have been checking the project route once again for unexploded ordnance and environmental issues. In the summer, three specialized offshore units will begin laying some 274 km of gas pipeline on the seabed of the Baltic Sea,” the company said.

Gaz-System said that on Wednesday, May 5, a meeting was held aboard Saipem’s Castorone vessel in Rotterdam regarding the final arrangements concerning the construction of the Baltic Pipe offshore gas pipeline.

“The meeting was attended among others by Piotr Naimski – Minister, Government Plenipotentiary for Strategic Energy Infrastructure, Aldo Amati – Italian Ambassador to Poland and representatives of the Management Boards of Gaz-System and Saipem,” the company said.

Piotr Naimski, Government Plenipotentiary for Strategic Energy Infrastructure: “The construction of a gas pipeline from Norwegian fields to Poland is in its final stage. Implementation of the strategy for diversification of gas supply sources and directions will be complemented by laying a gas pipeline section on the bottom of the Baltic Sea. The consistent actions of the Law and Justice government have brought visible results after 5 years. Today’s meeting with the contractor confirms that we are fully ready to start offshore works, which means that on 1 October of the next year, 2022, gas will flow from the Norwegian shelf to Poland.”

“The current preparations for Castorone’s entry into the Baltic Sea confirm that the project assumptions are being implemented according to plan.  By October next year, we will have completed all the elements of this complex investment program and will be ready to import gas from the Norwegian shelf via Denmark to Poland “ said Tomasz Stępień, President of Gaz-System. 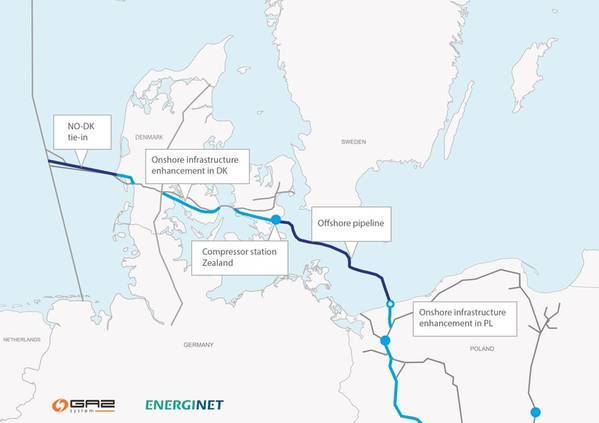