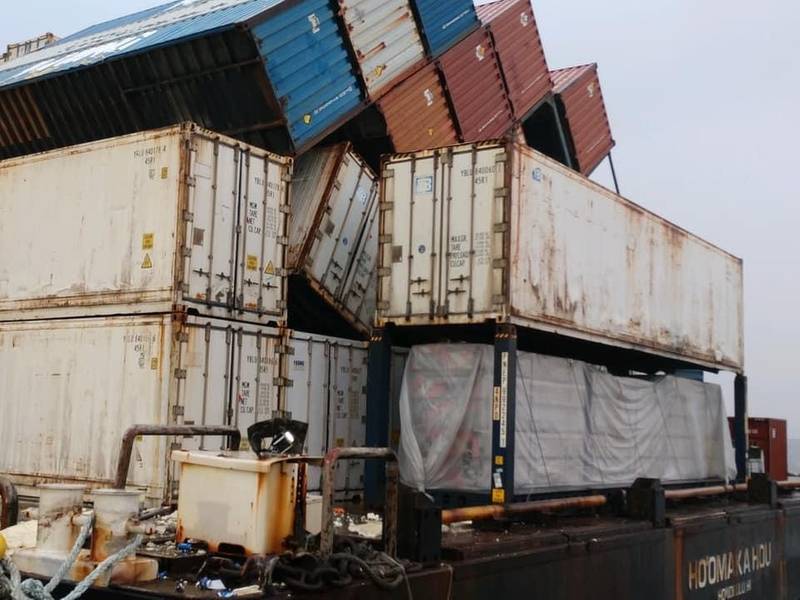 An improperly loaded barge resulted in the loss of 21 cargo containers into the ocean off the coast of Hawaii last year, the National Transportation Safety Board (NTSB) said on Wednesday.

The June 22, 2020 accident, 6.9 nautical miles north-northwest of Hilo, Hawaii, resulted in $1.6 million in damages. There were no injuries. The barge Ho’omaka Hou, owned and operated by Young Brothers, LLC, was being towed by the Hoku Loa at the time.

The NTSB determined that the probable cause of the collapse of container stacks onboard the barge was the company not providing the barge team with an initial barge load plan, as well as inadequate procedures for monitoring stack weights. That led to the undetected reverse stratification of container stacks that subjected the stacks’ securing arrangements to increased forces while in transit at sea, the agency said.

The NTSB conducted a study to determine the locations of the centers of gravity for each stack in the collapsed row of containers on the Ho’omaka Hou based on the weights of each container as provided by the company. The NTSB study showed that most were loaded in a manner that produced reverse stratification—meaning that heavier containers were loaded above lighter containers. Normal stratification is preferred because it creates a stack having the lowest possible center of gravity.

The containers were secured primarily with stacking cones, which provided little protection against the containers leaning or tipping. It is likely that when the barge turned about 30 degrees to a new south-southeasterly course the dynamic rolling from the seas on the vessel’s beam resulted in forces on the container stacks with the greatest reverse stratification, likely causing the containers to tip over, causing the row to collapse, the NTSB found.

“It is important for cargo planners to have tools, such as stow plans and calculations, to assist with determining proper stowage and the sufficiency of securing arrangements for containers stacked on barges, the report said. “These tools should address the potential that container stacks may be stacked in a reverse stratified manner.”