Posted by tesla@jabvertising.com on June 21, 2022 | Featured 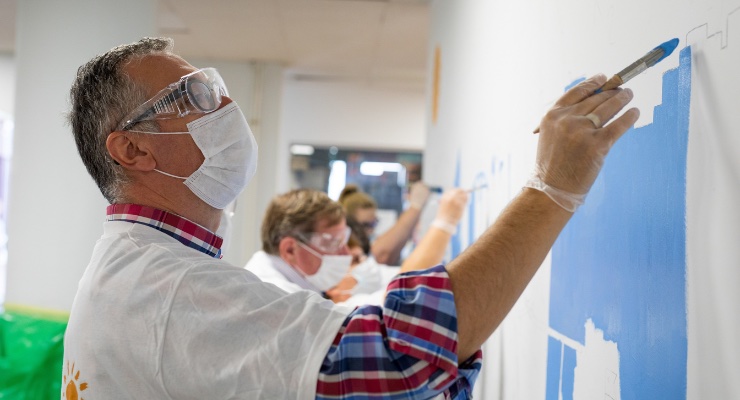 PPG announced the completion of a COLORFUL COMMUNITIES project in Hungary that helped revitalize the Csolnoky Ferenc Hospital in Veszprém. The project brought together more than 30 PPG volunteers, who created a theme park mural in one of the four hospital buildings that were refreshed as part of the project.

PPG provided $58,000 (17 million forints) and nearly 400 gallons (1,500 liters) of HÉRA paint by PPG, including Clean&Style washable, abrasion-resistant paint that can be disinfected and complies with hospital regulations. Experts chose colors from PPG’s THE VOICE OF COLOR palette for each of the four buildings with the help of designer Lovász Viktória.

“Our goal was to make orientation easier for the patients and ensure they know where the reception is and how to get to the different sections of the hospital complex,” Viktória said. “That’s why we decided to paint each section with an individual, memorable color. Colors have a huge impact on our emotions and physical well-being – a factor in health care that can’t be ignored.”

Professional painters renovated the hospital’s busiest areas, including the central admitting office, the main entrance and the elevator lobbies. The volunteers painted a mural depicting a fantasy theme park in one of the corridors next to the hospital’s pediatric ward. PPG’s donation also covered the installation of new directional signs.

“The happy and cheerful mural was an instant success with our patients and colleagues,” said Dr. Ibolya Töreki-Vörös, medical director, Csolnoky Ferenc Hospital. “We are also grateful for the new signage, which helps patients find their way around the hospital more easily.”

Csolnoky Ferenc Hospital is a major health facility serving residents of the city of Veszprém and surrounding region. It opened on Sept. 26, 1829, with only 12 beds. Its latest building was inaugurated in 1995, bringing the current bed total to 1,125.

“We wanted to make staff and patient days a little brighter by repainting the busiest areas,” said Miavecz István, PPG Trilak market director, Central Europe. “We are happy to support the hospital’s goal to become the most successful health care provider in the region and to build a community based on its rich heritage.”

PPG has supported several community projects in Hungary. It contributed to the renovation of the maternity ward of Jahn Ferenc Hospital in 2016 and the renovation of the staff room of the National Ambulance Service’s Markó Street Center in 2017. The following year, PPG volunteers helped repaint the Miskolc Autism Foundation’s dining room. In 2019, PPG volunteers repainted community buildings at the International Pető Institute’s Villányi Road Campus with murals chosen by the students living in the institution.

The Colorful Communities program, PPG’s signature initiative for supporting communities, aims to protect and beautify the neighborhoods where PPG operates around the world.