Posted by tesla@jabvertising.com on December 14, 2021 | Featured 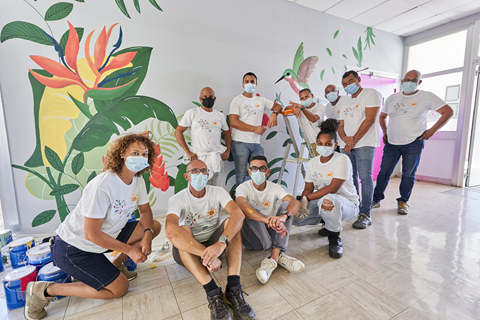 PPG announced the completion of five COLORFUL COMMUNITIES® projects in France. The projects helped revitalize four hospitals and a residence center and were carried out as part of a partnership with non-profit AFM-Téléthon, which supports research to fight muscular dystrophy and other diseases.

PPG contributed more than $75,000 (67,000 euros) for the projects, including 211 gallons (800 liters) of SEIGNEURIE® Elyopur paint by PPG that was used to brighten consulting and waiting rooms, corridors and an activity center. Seigneurie Elyopur paint by PPG is a Certified European Ecolabel paint containing depolluting anti-formaldehyde technology, making it ideal for use in a hospital environment.

The partners also commissioned the following artists to design and paint inspiring murals for the facilities with the help of PPG volunteers:

“Thank you to the PPG teams that, for four years, have brought color to healthcare facilities to the benefit of our patients everywhere in France,” said Laurence Tiennot-Herment, president of AFM-Téléthon. “Bravo for the great job done during the telethons. I look forward to seeing you next year.”

The Colorful Communities program provides PPG volunteers and products along with financial contributions to bring color and vitality to communities where the company operates around the world. PPG has seven manufacturing plants and five research facilities in France.

“This is the fourth year that we have committed to AFM-Téléthon,” said Pascal Tisseyre, PPG vice president, architectural coatings, Europe South. “For the 2021 telethon, we mobilized our employees across France to renovate places of care and make this a great moment of sharing and conviviality.”