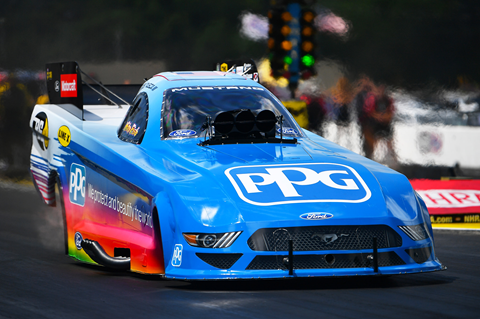 PPG will serve as Tasca Racing’s primary sponsor for two key races – the New England Nationals at New England Dragway in Epping, New Hampshire, set for June 11-13, and the Mile High Nationals at Denver’s Bandimere Speedway from July 16-18. PPG is also Tasca Racing’s secondary sponsor for all other races this season, which begins in March at the AMALIE Motor Oil NHRA Gatornationals and runs through November.

“We are thrilled to sponsor Tasca Racing again this year,” said Bill Shaw, PPG director, marketing and strategic sales, automotive refinish. “PPG and Tasca Racing have had a strong relationship for more than 25 years, ever since Bob’s grandfather began using PPG products in his Ford dealership collision center in Cranston, Rhode Island. It was only natural that PPG would help sponsor the Tasca team when it decided to take to the track. The sponsorship has become much more than just good business. Drag racing is exciting to watch.”

Tasca Racing’s Mustang, which is a recognizable force on the NHRA national circuit, is decked out in a winning paint design. The monster engine regularly reaches speeds in the 325-mph zone and beyond in just over 3.8 seconds. Performance at such a high level has given Tasca victories at six national NHRA events.

“It is great to have PPG as a sponsor again,” said Tasca. “Seeing the PPG logo on our car says it all about our partnership. With five collision centers and soon to be six spraying PPG, I am thrilled to continue that relationship. My grandfather said many years ago ‘Win on Sunday, sell on Monday.’ Well, we intend to win on Sunday and spray a lot of PPG product on Monday! I hope to see plenty of PPG customers and fans wherever we race.”

Tasca is also vice president of the Tasca Automotive Group. The company has multiple locations, including new car dealerships, collision centers and service centers, throughout New England and Florida. A new collision center will be opening in the greater Chicago area this year. PPG ENVIROBASE High Performance system is the brand of choice in the company’s collision centers.