Waterway traffic is coming back. November 2021 saw 52.1 million tons moving on the U.S. inland waterway system, the highest monthly tonnage since October 2019, a few months before the onset of the COVID-19 pandemic, and the shutdowns and stoppages of early 2020. Flows estimated by the Bureau of Transportation Statistics (BTS), part of the U.S. Department of Transportation, based on data from the U.S. Army Corps of Engineers (USACE) show a 25% rise from June 2020. Data in a presentation by The Waterways Council Inc (WCI), also using USACE data, showed overall tonnage, in 2019, of 514.9 million short tons, with petroleum and products leading (with 150 million tons), followed by coal (95.6 million tons), aggregates (81 million tons) and grains (77 million tons).

During 2021, selected barge grain movements (moving through key locks, approximately half of overall tonnage shown above) were down slightly from the previous year, according to the U.S. Department of Agriculture’s December 30 Grain Trade Report. Michael Steenhoek, executive director of the Soy Transportation Coalition, in speaking with Marine News, stressed the linkages between the export markets and agricultural transportation on the rivers, noting that the U.S. exported 60.5 million total metric tons of soybeans in the marketing year ended August 31, 2021 adding that, overall, 35 million of the total went to China. He said the leading export region is the Mississippi/Gulf, accounting for 27 million tons in the 2020/2021 marketing year. He said that, normally, around 60% of U.S. soybean exports will come out of that region, with the overwhelming majority of that arriving via barge transportation.

Medium term trends on the waterway system were discussed within a detailed study on the waterways released by Vanderbilt University in September 2021. The authors noted, “The last 20 years validate that the underlying markets relevant to barge demand are stable and resilient, and the summary outlook for 2025 anticipates that tonnages will be slightly lower and ton-miles slightly higher than 2019.

The increase in ton-miles is in spite of a reduction of tons and is the result of a generally bullish outlook for the agricultural sector, which is expected to increase by nearly 15%. Most agricultural barge transports are also longhaul shipments of 1,000 miles or more. In short, the U.S. is expected to retain its position as one of the world’s largest grain exporters.” The USDA, in its 2021 “Agricultural Projections to 2030”, shows small, but steady growth in exports (which drives barge traffic into the Lower Mississippi region) for the major grains. 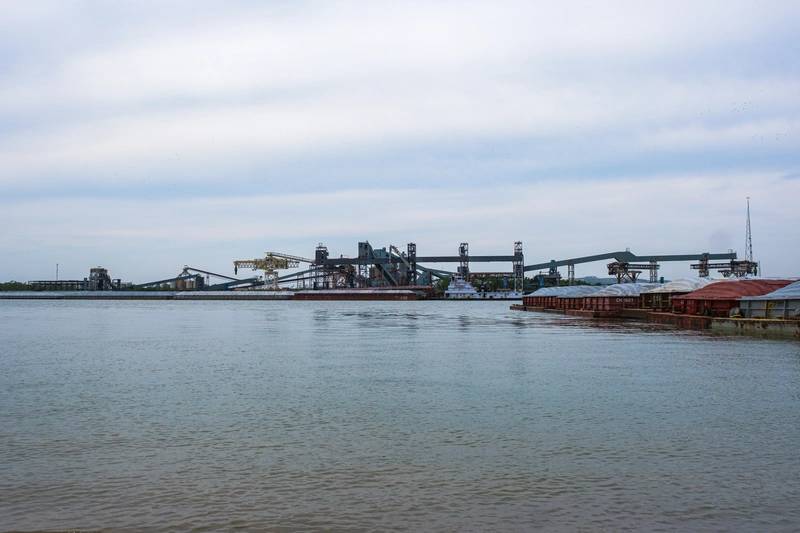 While agricultural moves are likely to grow, the opposite is true for coal. The Vanderbilt University researchers note that “…the energy sector sees the most significant projected change, reflecting a continuing decline in utility coal use, and the beginning of a gradual shift away from petroleum use across numerous economic sectors as decarbonization policies and practices are implemented, impacting overall refined petroleum demand.” Similar views can be seen at the level of individual ports. For example, in a Kentucky Economic Development Summit, held in Spring 2021, scenario-based forecasts for 11 individual riverports out to 2045 (prepared by IHS Markit) were presented. A number of ports saw grain replacing coal as the top commodity handled; in those ports handling coal, its moves fall substantially under the varied scenarios.

The forecast for the tank barge marketplace is upbeat. In a conference call accompanying the release of Kirby’s 2021 fourth quarter earnings, company CEO David Grzebinski told investors: “In inland marine, we expect a strong market in 2022 driven by continued economic growth, increased volumes and minimal new barge construction. This should contribute to further improvements in the spot market with our barge utilization ranging in the high-80% to low-90% range for the year.” He did caution that “the first quarter [would be] the lowest due to seasonality and the headwinds related to COVID with the positive pricing environment building throughout the year.” For comparison, during the Spring 2020 lockdowns, Kirby’s utilization had plunged toward the 60% level, with 2021 providing a recovery up toward 80% utilization.

Clark Todd, chairman and CEO of Blessey Marine Services, a New Orleans area based specialist in transporting liquid cargoes for petroleum and petrochemical companies as well as commodity trading houses, explained to Marine News, “We have continued to see a moderate increase in demand for inland tugboat and barge business to start the year. The equilibrium of supply and demand of our assets across the industry is tightening up as fewer new build tug boats and barges will be built in 2022. We are optimistic that the upcoming summer driving season will yield stronger demand as consumption of refined products increases. So, we look for 2022 to be a better year for everyone in the inland tugboat in barge business.” 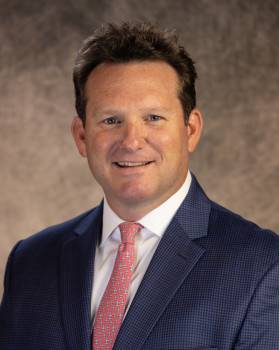 “We look for 2022 to be a better year for everyone in the inland tugboat in barge business.” – Clark Todd (Photo: Blessey Marine Services)

In the investor call’s Q&A session, Kirby’s Grzebinski offered similar sentiments, saying, “Demand continues to grow. We still got some chemical plants coming on. And as you know, demand for liquid volumes typically goes up with GDP. We’re looking at a pretty good GDP number this year and probably next year…. [the supply picture] is even better. With barge pricing a new 30,000-barrel barge is probably $4.1 million to $4.2 million for a brand-new barge. That’s the highest we’ve ever seen. And a lot of that is steel price and some labor costs, but at those prices, we’re not seeing much newbuilds if any at all… and barge retirements are still going on because the equipment is getting older…So, when you put supply and demand together, this is about the best we’ve seen in a long, long time, and we think it’s a multiyear kind of upswing.”

Equity analyst Gregory Lewis, from brokerage BTIG, in a report released following Kirby’s call—where his recommendation was upgraded to “Buy” from “Neutral”—wrote, “After limping along for years, first around barge oversupply (2017-2019) and then from COVID (2020-2021), the inland barge market finally looks to be ready to inflect higher. Not surprisingly…the near- and medium-term setup looks good… And while the outlook for U.S. GDP remains constructive, which should buoy continued growth in both refined product and petrochemical volumes, on the back of what has been a challenging five-year period for barge owners the medium-term supply outlook is constructive (the inland barge fleet looks to have shrunk in 2021 and the lack of orders at yards points to negative fleet growth again in 2022).”

Going forward, new attention on infrastructure in Washington, D.C., against an ongoing backdrop of less carbon intensive transport generally—the subject of the Vanderbilt University study—may help waterborne cargo flows, with switching from less efficient modes and greater supply chain resiliency, encompassing matters such as Hurricane Ida, the I-40 Bridge and Colonial Pipeline disruptions now on the radar. The other big mover, aggregates (encompassing a variety of cargoes), is tied to construction, and waterborne flows could likely increase with spending on roads and other projects.

The WCI applauded the passage of the Infrastructure Bill, in late 2021, earmarking $2.2 billion for inland waterways projects. In mid-January, 2022, when the USACE identified specific projects to be funded, WCI president and  CEO, Tracy Zea said, “Today’s release of inland waterways infrastructure funds will not only advance the inland waterways construction portfolio but also create thousands of skilled jobs for America’s building trades, make American farmers more competitive, and promote energy security. WCI thanks its members and supporters on Capitol Hill, who helped to push this funding over the goal line.” Noteworthy projects funded included the Kentucky Lock (on the Tennessee River, near Paducah) the Montgomery Lock on the Ohio River (about 30 miles downstream from Pittsburgh), and Lock and Dam 25 on the Upper Mississippi River (mile 241, north of St. Louis), benefitting from the USACE’s Navigation & Ecosystem Sustainability Program (NESP). 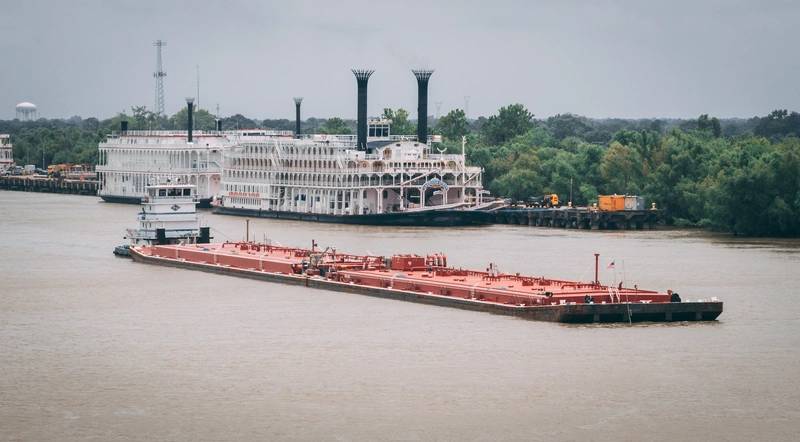 Indicative of future shifts of traffic onto the rivers is progress being made on shifting containerized cargo from crowded supply chains onto ships built specially for transporting boxes down the Mississippi River. American Patriot Holdings (APH), a company formed by a trio of industry veterans involved currently involved in barging of liquid cargoes, announced that it would be seeking bids from U.S. yards for construction of four “hybrid”—liquefied natural gas (LNG) and conventional fuel—fueled container vessels, with options on four additional vessels. APH has been inking tie-ups with ports on the rivers, including terminals at Plaquemines Parish, La., Memphis, Tenn. (a distribution hub served currently by container on barge services linking it to New Orleans), and nearby to St. Louis, which local organizations have promoted as “The Ag Coast of America”. The vessel designs, ranging from 1,800 TEU for use on rivers with locks up to 2,400 TEU for use on the Mississippi River, will enable speeds faster than those of traditional tug/ barge tows. One group, the Mid-America Freight Coalition, wondered whether the plans represented a “Marine Freight Renaissance”.

Efforts to supercharge container transport on the Mississippi have been underway for several years, but they have taken on a sense of urgency with the ongoing supply chain chaos of 2021. The Soy Transportation Coalition’s Steenhoek offered a very positive view of APH’s plans, in remarks at Kentucky’s 2020 Riverports Summit. “There is a trend towards moving agricultural commodities via containers, including commodities like soybeans.” In moving beans to export markets, he noted that bulk transport would predominate, but container transits, backhauls for boxes that transported consumer goods up the rivers: “the slice of the pie chart that is labeled as containerized shipping will continue to grow….as shippers try to localize supply chains in a global market.”

Modal shifts from surface transport (road and rail) on to the rivers has also been a feature in the bulk cargo moves. The U.S. Maritime Administration’s America’s Marine Highway program’s late 2021 awards included a $1.4 million grant for the M-70 Barge Service linking Cincinnati with ports in Kentucky along the Ohio River, following up on $2.9 million awarded the previous year for related projects. Steel producer Nucor Corporation, the project sponsor, will increase its transport of steel products by barge, taking trucks off the roads. When the 2021 grants were announced (which also included funding for Seacor’s container-on-barge linkage from Memphis to the Lower Mississippi River), the Acting Maritime Administrator Lucinda Lessley described AMH as “an innovative program that encourages the use of America’s navigable waterways for the movement of freight and people as an alternative to land-based transportation.” Analysts and port executives participating in the Kentucky Riverports 2021 session (a follow-up to the 2020 event) emphasized the potential to divert multiple types of cargo moving in surface modes on to the Ohio River, and other waterways.

The year 2021 did not see any significant merger and acquisition activity, so that the well-known names continue to dominate. On the dry side, with a total fleet of more than 18,000 barges, Ingram’s fleet totaled around 3,900, American Commercial Lines (ACL) with more than 3,000 and American River Transportation (tied to agri-giant ADM) with approximately 1,800 barges. On the liquid side, with 4,000 total barges, Kirby dominated with more than 1,000 units, followed by Canal Barge, ACL and Florida Marine, each with more than 300 barges.

In summing up the sector’s overall picture for Marine News, Blessey’s Clark Todd said, “As the incoming chairman of the board of American Waterways Operators, I have a unique perspective of the entire inland tugboat and barge industry. In my role at AWO, I have the opportunity to have dialogues with the different sectors of the marine world. A few of the sectors have already started to see stronger demand and utilization. With rising crude oil prices, and an eagerness for folks to travel, we believe 2022 will be a very strong as a jumpstart to recovery in our industry.” 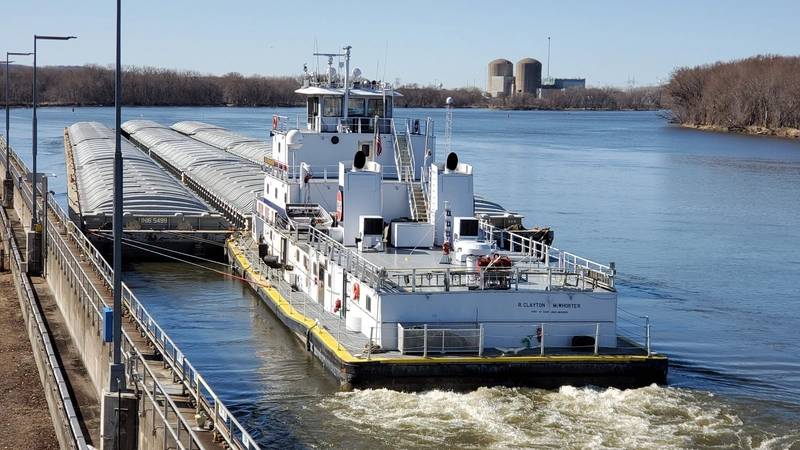