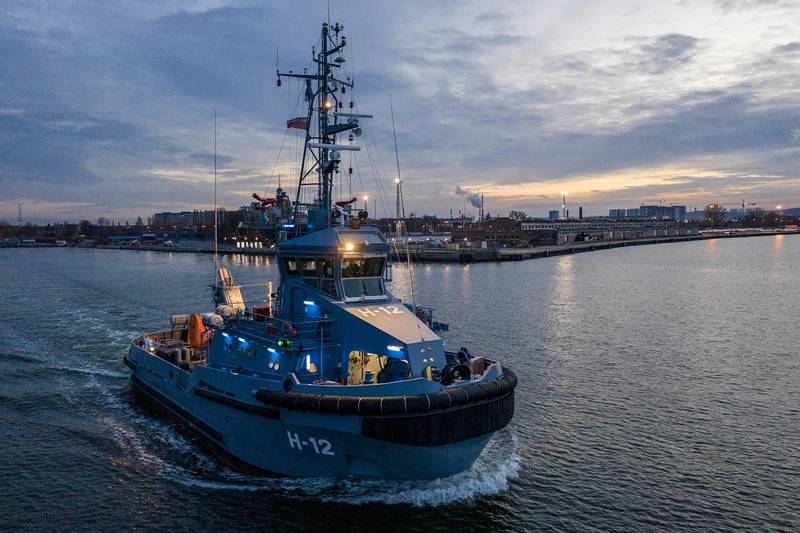 Polish shipbuilder Remontowa Shipbuilding said it recently delivered the fourth in a series of six tugboats for the Polish Navy.

The vessel, H-12 Semko, was built in Gdańsk and sailed to Świnoujście for handover to the 8th Vice Admiral Kazimierz Porębski Coastal Defense Flotilla.

The contract for the design and construction of six tugs was signed in June 2017. The workboats will be used by the Polish Navy for military and logistics operations support at sea and in ports, as well as for technical evacuations, personnel transfers, search and rescue operations and oil spill recovery. FSIC IA ice class reinforcement enables the vessels to be deployed in the Baltic Sea at any time of the year.

Each vessel’s propulsion system consists of two ice-classed SCHOTTEL Rudderpropellers type SRP 360 with 2.0 m fixed pitch propellers. Each thruster is driven by an MTU 12V 4000 engine delivering a power of 1,193 kW. This arrangement gives the tugs a bollard pull of up to 35 tonnes and a free-running speed of 12 knots.

In addition to the recently delivered H-12 Semko, Remontowa has already delivered tugboats Bolko, Gniewko and Mieszko in January, March and July 2020 respectively. The shipyard has also started port trials on the fifth tug, H-3 Leszko, which will last until January 2021. The series’ final tug, H-13 Przemko, was launched in December 2020.