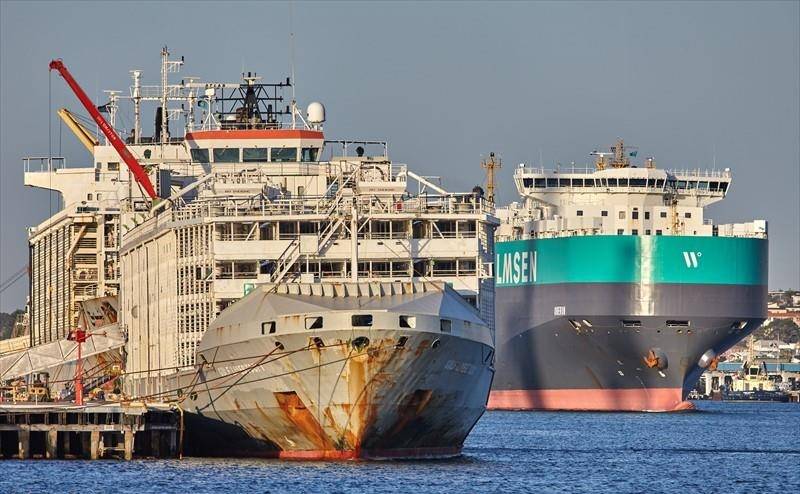 A crewman from a cattle ship that capsized enroute from New Zealand to China has died after being pulled unconscious from water by the Japanese coastguard on Friday, while it emerged the vessel had a history of mechanical issues.

The unidentified man was only the second crewman to be found. The search is still on for the remaining 41 crew members after the ship carrying 6,000 cattle capsized in the East China Sea on Wednesday.

Rescuers also found a life jacket and cattle carcasses in the area where the Gulf Livestock 1 is believed to have sunk after it sent a distress call amid strong winds and heavy seas whipped up by Typhoon Maysak.

Gulf Livestock 1, owned by UAE-based Gulf Navigation, lost engine power before it was hit by a massive wave, according to Chief Officer Sareno Edvarodo, who was rescued on Wednesday.

The ship is technically managed and crewed by Germany’s Marconsult Schiffarht GMBH, while the commercial manager is Jordan-based Hijazi & Ghosheh Co.

“We are monitoring the situation closely,” a spokesman for Gulf Navigation said in an emailed statement. “Our hearts go out to those onboard and their families at this time.”

The company is working with those involved in rescue efforts and regrets the loss of livestock, he added.

Several maritime reports logged over the past two years showed the ship may have had some mechanical defects and revealed operational concerns.

A December inspection report from Indonesian authorities on the website of Equasis, which collates ship safety information from both public and private sources, logged issues with the ship’s propulsion and auxiliary machinery.

The issues included “deficiencies” with the propulsion main engine and gauges, thermometers.

A 2019 report by the Australian government on the cattle ship’s transit in June from Australia to Indonesia noted the vessel’s departure was delayed for a week because of “stability and navigation issues identified by the Australian Maritime Safety Authority (AMSA)”.

AMSA’s website showed Gulf Livestock 1 was detained by the Australian authorities for three days in May 2019, because of issues related to its navigation Electronic Chart Display and Information System. The report cited both a lack of up-to-date charts and training for officers using the system.

A report on the website of FleetMon, a German-based maritime tracking site, shows the ship, under its previous name of Rahmeh, anchored off the Turkish coast in September 2018 “to fix a mechanical problem” that required the delivery of spare parts.

The FleetMon report also noted some concern from local residents about the ship’s extended stay at Cesme port, because livestock on a previous voyage had been found to be infected with anthrax.

Gulf Navigation, Marconsult Schiffarht and Hijazi & Ghosheh Co. did not immediately respond to questions about the reports.

Search continues
The Japanese coastguard said on Friday it had not set a deadline to end the search for survivors from the ship, which left Napier port in New Zealand on Aug. 14 and was due to arrive 17 days later at the Port of Jingtang in Tangshan, China.

Four vessels, an airplane and several divers were scouring the waters on Friday when they discovered the second crew member, who has not been publicly identified.

The coastguard said the man had died a short time after they pulled him from the sea about 120 km (75 miles) north-northwest of Amami Oshima island and transferred him to hospital.

Melbourne-based Australasian Global Exports confirmed it employed four of the people onboard, with the remaining crew engaged by Gulf Navigation.

“We are in full contact with the families of our four colleagues and are offering them all the support we can,” it said in a statement.

The crew was made up of 39 people from the Philippines, two from New Zealand, and two from Australia, the coastguard said.