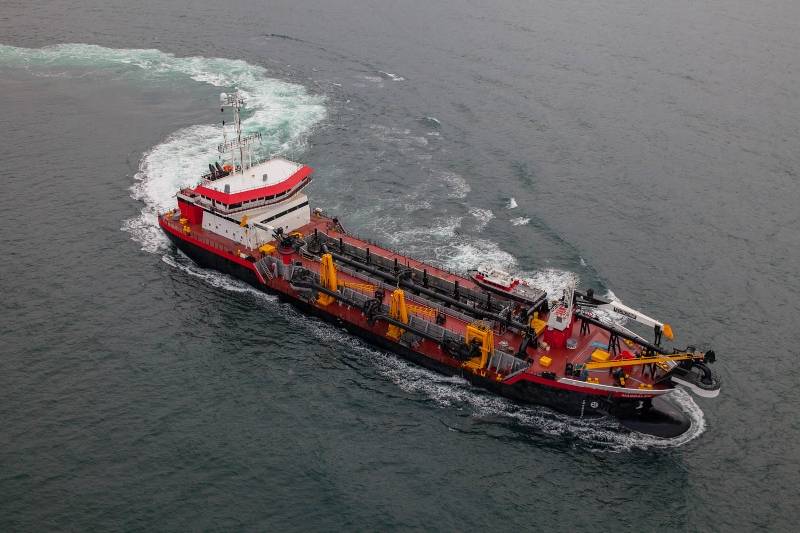 A shipment of Royal IHC’s equipment is traveling from Europe to the U.S. to be installed on Weeks Marine’s new trailing suction hopper dredge (TSHD) R.B. Weeks, currently under construction at Eastern Shipbuilding Group’s Allanton shipyard in Florida.

In May of 2020, Royal IHC and Weeks Marine Inc. entered into a contract for the engineering and equipment delivery for the 6,540-cubic-meter-capacity newbuild, an identical vessel to the Magdalen delivered to Weeks from Eastern in 2017. Like the Magdalen, the R.B. Weeks will be equipped with Royal IHC designed and built equipment, including the complete and highly efficient dredging installation, dredging automation and instrumentation, propulsion and main electrical system.

On October 27 the IHC Dredge Equipment components were loaded on Lekstroom barge Christina and transported to the facilities of the Port of Rotterdam, Waalhaven. In the meantime, other truckable- equipment, supplied by IHC DBS and external suppliers from IHC Holland, were gathered in warehouses in Rotterdam area. On November 14 all the equipment was loaded on the MV Marsgracht, operated by dry cargo specialist Spliethoff, and is currently in transit to Panama City, Fla. where it will be installed on board.

During the past year tho key components have been manufactured, assembled and shop tested in workshops all over the world. Part of the equipment package (35 sea containers and the suction inlet section) have been sent in six separate shipments to the U.S. already. In close collaboration with Weeks, it was decided that Royal IHC would consolidate the out of gauge equipment in one single shipment to limit the transport costs for barge and crane rental for either party.

Royal IHC will also provide a number of technical services, including the assistance of its qualified engineers for inspection during installation of the delivered equipment at the shipyard, and support during start-up and commissioning of the dredger. Those activities are scheduled for 2022 and early 2023. The delivery of the R.B. Weeks is scheduled for early 2023.