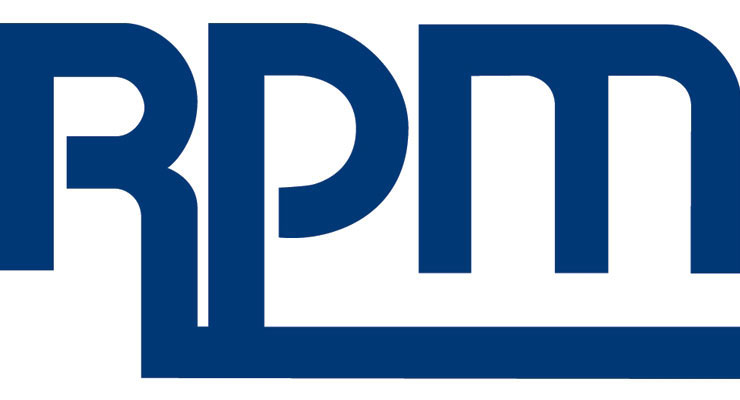 The first quarter included restructuring-related and other expenses that are not indicative of ongoing operations of $10.0 million during fiscal 2022 and $18.9 million in fiscal 2021. Excluding these charges, RPM’s adjusted EBIT decreased 23.2% to $206.8 million compared to $269.2 million during the year-ago period. The company has excluded the impact of gains and losses from marketable securities from adjusted EPS, as their inherent volatility is outside of management’s control and cannot be predicted with any level of certainty. These investments resulted in a net after-tax gain of $2.3 million for the first quarter of fiscal 2022 and a net after-tax gain of $8.1 million during the same quarter last year. Excluding the restructuring and other charges, as well as investment gains, adjusted diluted EPS decreased 25.0% to $1.08 compared to $1.44 in the fiscal 2021 first quarter.

“Our Construction Products Group, Performance Coatings Group and Specialty Products Group generated solid sales and adjusted EBIT growth for the fiscal 2022 first quarter. Their performance was particularly impressive given the raw material shortages, supply chain disruptions and inflation all of our segments have experienced and which have resulted in a negative impact on first-quarter sales of approximately $200 million. Sales and earnings for our Consumer Group decreased during the quarter as a result of these factors, as well as a difficult comparison to the prior-year period. All indicators suggest that the underlying demand for our consumer products is still strong and that the supply and material disruptions the segment is currently experiencing are temporary,” stated RPM Chairman and CEO Frank C. Sullivan.

“Across the company, we are continuing to implement price increases, where appropriate, in order to protect our margins. We also continue to benefit from incremental cost savings resulting from our recently concluded MAP to Growth operating improvement program,” stated Sullivan. “Additionally, we are making strategic investments for growth, as evidenced by the two acquisitions we recently completed and the manufacturing facility we purchased. The 178,000-square-foot plant located on 120 acres in Texas will serve as a manufacturing center of excellence for all four of our operating segments. It is fully operational and has an experienced operating team that will enable us to add long-term resilience in our supply chain, improve fill rates and more easily expand production of a number of our high-growth product lines in the coming quarters.”

“Organic growth of 15.0% in the Construction Products Group was particularly impressive given that a relevant market indicator for the segment, non-residential construction put in place, is down 11.6% this calendar year, according to the Portland Cement Association. Nearly all of the businesses in the segment experienced strong top-line performance, in part by focusing on growing markets such as technology and distribution. Those that performed particularly well were our businesses providing commercial roofing systems, concrete admixtures and repair products, and insulated concrete forms. The segment’s European operations generated double-digit top-line growth, due in part to an easier comparison to last year’s first quarter when shelter-in-place requirements were most severe,” stated Sullivan. “Segment earnings increased as a result of market share gains, operational improvements, cost controls and selling price increases, which offset production inefficiencies due to supply chain disruptions and material cost inflation.”

Performance Coatings Group net sales were $285.6 million during the fiscal 2022 first quarter, a 9.9% increase compared to sales of $259.8 million reported a year ago. Organic sales increased 3.8%, while acquisitions contributed 3.7% and foreign currency translation increased sales by 2.4%. Segment IBT was $35.1 million compared with IBT of $28.5 million reported a year ago. EBIT was a record of $35.0 million, a 22.6% increase compared to EBIT of $28.5 million in the fiscal 2021 first quarter. The segment reported first-quarter restructuring-related expenses and other charges that are not indicative of ongoing operations of $2.5 million in fiscal 2022 and $2.3 million in fiscal 2021. Adjusted EBIT, which excludes these charges, increased 21.6% to $37.5 million during the first quarter of fiscal 2022 from $30.9 million during the year-ago period.

“Performance Coatings Group results, with EBIT growth outpacing sales, were encouraging because it has been the segment most heavily impacted by the pandemic. Sales increased at nearly all of the Performance Coatings Group’s major business units, partially aided by comparisons to last year’s first quarter when pandemic restrictions did not allow outside contractors on worksites and poor energy market conditions led to deferrals in industrial maintenance spending. Sales were strong at our recently acquired Bison business, in emerging markets and in industrial maintenance outside of the energy sector,” stated Sullivan. “Earnings were boosted by improved pricing, incremental savings from operating improvement initiatives and two recent acquisitions.”

Consumer Group sales were $538.4 million during the first quarter of fiscal 2022, a decrease of 16.0% compared to sales of $641.2 million reported in the first quarter of fiscal 2021. Organic sales decreased 20.1%, while acquisitions contributed 3.3% to sales and foreign currency translation provided a 0.8% tailwind. Consumer Group IBT was $45.9 million compared with IBT of $132.7 million in the prior-year period. EBIT decreased 65.5% to $45.8 million compared to EBIT of $132.8 million in the fiscal 2021 first quarter. The segment incurred restructuring-related expenses and other costs that are not indicative of ongoing operations of $1.1 million during fiscal 2022 and $3.9 million during fiscal 2021. Excluding these charges, fiscal 2022 first-quarter adjusted EBIT was $46.9 million, a decrease of 65.7% compared to adjusted EBIT of $136.7 million reported during the prior-year period.

“Our Consumer Group faced a tough comparison to the prior year when sales increased 33.8% and adjusted EBIT was up 121.6% due to unprecedented demand for its home improvement products during the pandemic,” stated Sullivan. “The segment experienced a negative sales impact of approximately $100 million during the first quarter of fiscal 2022 from production outages due to raw material supply constraints. However, the segment’s fiscal 2022 first-quarter sales were 12.3% above pre-pandemic levels of the first quarter of fiscal 2020 in spite of the negative sales impact from shortages. There is pent-up demand for our products, and inventories in many of our channels are low. We expect to recover the lost sales when conditions normalize. Earnings declined during the first quarter of fiscal 2022, as compared to the prior year, as a result of inflation in materials, freight and labor, as well as the unfavorable impact of supply shortages on productivity. These factors were partially offset by price increases and savings from our operating improvement program. We are proactively building resiliency in our supply chain to secure the raw materials we require today and in the future,” stated Sullivan.

“Cash flow decreased due to the unfavorable supply environment’s impact on working capital metrics and margins. We have been building safety stocks, where possible, to mitigate the impact of severe raw material shortages. Liquidity remains high, enabling us to manage through the current supply chain challenges and continue making investments in operational improvements, acquisitions and manufacturing capacity expansions,” stated Sullivan.

“Looking ahead to our fiscal 2022 second quarter, we expect raw material, freight and wage inflation to persist, as will the raw material shortages and supply chain challenges we have been experiencing. In addition, we face another difficult comparison to the prior year when consolidated adjusted EBIT increased 29.7%,” stated Sullivan. “We anticipate these factors to be partially offset by price increases, operational improvements and additional manufacturing capacity.”

“Based on these factors, we expect our fiscal 2022 second-quarter consolidated sales to increase in the mid-single digits,” stated Sullivan. “Our Construction Products Group, Performance Coatings Group and Specialty Products Group are anticipating double-digit sales growth. Our Consumer Group is anticipating another double-digit decrease in sales due to continued raw material shortages and a difficult comparison to the prior-year period when pandemic-fueled demand rapidly drove organic growth up 15%. However, we do expect the segment’s sales to be above its pre-pandemic level, which is a fairer comparison. While underlying demand for our products and services is strong, significant material shortages and inflationary pressures remain. Accordingly, we expect that the second-quarter results will be directionally similar to the first quarter, with significant year-over-year declines again in our Consumer Group, which is still lapping tough comparisons, and double-digit sales and earnings increases for our other three segments in aggregate. This will result, on a consolidated basis, in a decline of adjusted EBIT of 15% to 25% versus the second quarter of fiscal 2021.”

“Moving forward, we will maintain the positive momentum created by our operating improvement program as we complete its remaining projects, leverage resources across RPM to manage supply chain issues and meet customer demand, identify new opportunities for efficiencies through our continuous improvement culture, and make investments in growth opportunities, including capacity expansions,” Sullivan concluded.