The wind farm was put up for tender with the flexibility of 800-1000 MW, and a new aspect is that grid connection from the wind farm and to the transmission grid is included in the tendering procedure.

Several bidders had offered to build the offshore wind farm with the largest possible capacity and at a minimum price of only 0.01 øre/kWh, leading the Danish Energy Agency to opt for a lottery system to select the winner.

The draw took place earlier today and was monitored by an independent auditor and the Danish State’s legal advisor to ensure that the draw complied with public procurement terms. Moreover, the bidders for which lots were drawn also took part to ensure full transparency, the Danish Energy Agency said.

Sven Utermöhlen, CEO Wind Offshore, RWE Renewables said: “Denmark is one of the key offshore markets in Europe with high growth ambitions. As one of the global leading players in offshore wind, we are delighted to be awarded the Thor project – Denmark’s largest offshore wind farm to date. This success creates further momentum to boost our activities in the country by realizing our second offshore wind farm off the Danish coast. With Thor we will contribute significantly to Denmark’s green energy transition.”

“Thor Wind Farm I/S has won the concession to build Thor Offshore Wind Farm. This is the first time a tendering procedure has been completed for offshore wind energy in Denmark without aid,” Danish Energy Agency said.

When power is produced, the winner is expected to pay DKK 2.8 billion (around $426,2 million) to the Danish state within just a few years, the DEA added.

Thor will be able to supply electricity for around 1 million Danish households. Total investment costs for Thor have been estimated at around DKK 15.5 billion (around $2,36 billion)

Thor will be fully established and connected to the grid by no later than the end of 2027, and the authorization is for 30 years, with an option for a five-year extension.

Director general of the Danish Energy Agency, Kristoffer Böttzauw said: “The tendering for Thor Offshore Wind Farm is yet another milestone in the history of Danish offshore wind power. For the first time ever, the state must be paid for authorization to establish an offshore wind farm. The competitive price in the tender is even more impressive because, for the first time, the winning bidder will also have to pay for the landing cables and grid connection. This is very promising for future tendering procedures for offshore wind energy and for the green transition.”

It is expected that Thor Offshore Wind Farm will produce electricity from about 2026.

“With the expected electricity prices, it is anticipated that the winning bidder will have paid the state the DKK 2.8 bn. over very few years […].After this, in practice, there will be no financial transactions between the state and the winning bidder, and the wind farm will be run on purely commercial terms, without support, for the rest of its anticipated 30-year life.”

“This means that it is the world’s first offshore wind farm constructed with payments to the state. Another new aspect is that grid connection is included in the bid price (i.e. the offshore transformer substation, including the substation onshore and cables up to the transmission grid in Idomlund),” DEA said. 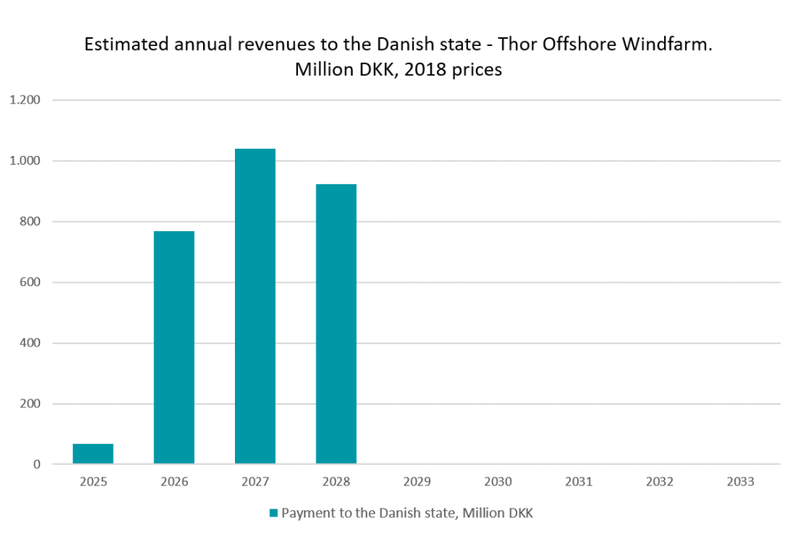