Posted by tesla@jabvertising.com on November 1, 2020 | Featured

South America contains some of the largest deepwater oil reserves in the world, with Brazil alone possessing over an estimated 30 billion barrel of oil equivalent (BOE). In Guyana, ExxonMobil has recently made its 18th deepwater discovery, which adds to the already estimated eight billion BOE on the Stabroek Block.

These relatively remote discoveries are largely greenfields where few geotechnical data exist. To develop the infrastructure necessary to extract hydrocarbons, an in-depth understanding of the seafloor soil properties that will interact with structures is needed.

In 2019 Benthic, an Acteon company, opened its Rio de Janeiro office staffed with experienced local personnel as a deepwater geotechnical specialist contractor in the region was required. More recently, in partnership with the Federal University of Rio de Janeiro, Benthic has developed its geotechnical laboratory for standard and advanced soil testing, reporting, and geoscience research. In Brazil, Benthic is the only geotechnical survey contractor capable of conducting deepwater site investigations in up to 3,500m of water and conducting onshore laboratory testing and reporting in-country.

From the inception of Benthic’s Portable Remotely Operated Drill (PROD), innovation, research and development, and continuous improvement have comprised the foundations Benthic has been firmly grounded upon.

PROD’s technological advancements, engineered in a package that is portable and self-contained, represent a step-change in how offshore site investigations are conducted when compared to drillships, the historic system of choice used globally for decades to collect samples and data offshore. Fundamentally, drillship technology has not evolved during this period as water depths of new discoveries have steadily increased. While other seabed-based drilling systems have entered the market, none have matched the widespread success that PROD has achieved.
Since 2017 Benthic has successfully executed four projects in Brazil and three projects in Guyana at future FPSO developments in water depths up to 3,100m. 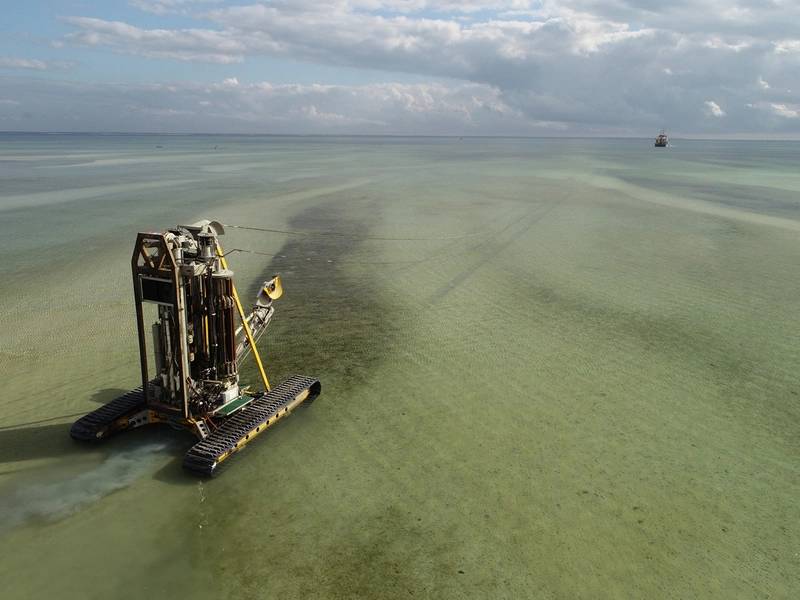 A 2011 paper co-authored by Statoil (now Equinor) revealed that seabed drilling technology (PROD) is 3-5 times faster than drillships at a water depth of 1,300m with soft soil conditions. Furthermore, as water depths increase beyond 1,300m up to 3,000m, the productivity is up to seven times faster than a drillship, resulting in materials saving to the client, through fewer days in the field, and less exposure to the crew onboard.
Once on the seabed, the tool is powered and controlled by an umbilical cable from a support vessel, so it is decoupled from metocean conditions.
Thus, minimal unwanted energy is imparted at the seabed, delivering higher-quality samples and data than ship-mounted systems relying on heave compensation. Benthic’s Hydraulically Tethered Piston Corer (HTPC) exploits ambient hydrostatic pressures to deliver optimal sample quality and maximize recovery.

Independent testing has demonstrated that PROD recovers quality samples of sensitive sediments from the mudline, with minimal fabric disturbance as required. These samples, complemented with cone penetrometer testing (CPT) data, allows the engineer to optimize the design of bottom-founded structures, which often reduces fabrication and installation costs.

The technology is inherently safe by design, and this is why clients often specify and prefer seabed drilling technology for their deepwater programs. Deployed on an umbilical and controlled remotely by computer, offshore personnel interaction with equipment and tooling is minimized.
As a result, PROD has achieved an outstanding safety record with no lost time incidents (LTI) in over 1.5 million manhours worked. Also, the device has a lower environmental impact than traditional geotechnical drilling methods because of the usage of biodegradable hydraulic and environmentally considerate drilling fluids.

While still maintaining focus on deepwater projects, Benthic is also taking the necessary strides to expand capabilities in shallow water, focusing on the growing offshore renewables market, where PROD has not yet garnered considerable attention.
Although some may consider PROD a deepwater tool, about 25% of the projects completed have been in shallow water, in water depths less than 100m. Benthic’s new 4,000m depth-rate PROD system is currently under construction and expected to be delivered and in operation early 2021. It expects to produce a drilling system that is at least equally competitive with drillships in shallow water environments where geologies are commonly more complex and difficult to drill.

The innovative TRAC PROD system, designed specifically to address difficult to access nearshore areas, worked successfully for multiple clients in nearshore Mozambique two years ago. Benthic’s engineering team integrated tracks commonly found on subsea trenchers with PROD for this bespoke solution. After being deployed, TRAC PROD tracks up to 2,000m away from the vessel and operates submerged in water or open air, conducting operations in areas not feasible by other geotechnical contractors.