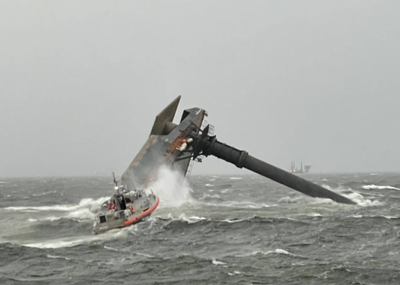 The U.S. Coast Guard and National Transportation Safety Board on Friday wrapped up the formal public hearing proceedings into the sinking of the liftboat Seacor Power and the death of 13 of its 19 crewmembers in the Gulf of Mexico.

The Seacor Power capsized in heavy winds and seas on April 13, 2021, about seven miles south of Port Fourchon, La. Six crewmembers were initially rescued, and six were recovered unresponsive during the course of the response.

Over the course of the nearly two-week-long hearing, which convened daily starting August 2, the joint investigation board reviewed and considered evidence related to the loss of the vessel. The board heard from 31 witnesses, who provided testimony into the conditions influencing the vessel prior to and at the time of the casualty. Testimony also focused on weather, training, the Seacor Power’s material condition, owner and operator organizational structures and culture, the regulatory compliance record of the vessel, Coast Guard policy, and practices related to vessel design, engineering and inspections. Additionally, 230 pieces of evidence were identified as exhibits of public record regarding the investigation.

“Today marks the conclusion of this public hearing, but it does not mark the end of our work as a Marine Board of Investigation,” said Marine Board of Investigation Chairwoman Capt. Tracy Phillips, U.S. Coast Guard. “We will continue to collect and review any evidence that may be submitted in the future. We will also begin our transition to the analysis phase of this investigation, and then later start compiling our report. On behalf of the entire board, I’d like to express our deepest condolences to the friends, shipmates, and families of the mariners who were lost during this accident. Our investigation can’t change the outcome of this tragic event, but our team is determined to examine every aspect of the incident, to push for any needed changes to enhance maritime safety and to prevent similar casualties from occurring in the future.”

Once the Board compiles its findings into a report of investigation, that report will be publicly released after the convening authority, the Commandant, evaluates the recommendations and releases a final action memo outlining the Coast Guard’s position on the Board’s recommendations.

The hearing was broadcast live as a matter of public record, and recordings of the proceedings are available here, while documents, exhibits, videos and other hearing information can be found here.