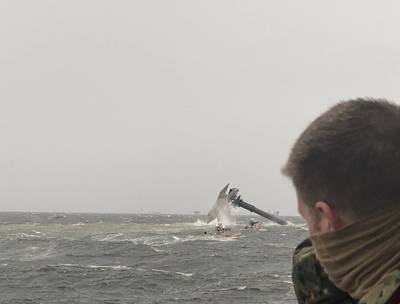 A second unresponsive person has been recovered from the water near a lift boat that capsized in the Gulf of Mexico, the U.S. Coast Guard said on Friday.

A Coast Guard helicopter crew spotted the person in the water at 7:10 p.m. on Thursday while searching the area about 8 miles south of Port Fourchon, La. The crew of the Coast Guard Cutter Benjamin Daily, also in the area searching, recovered the unresponsive person and transported him to Coast Guard Station Grand Isle where a coroner pronounced the man deceased.

Coast Guard and other local responders have been scouring the area by sea and air since the 129-foot Seacor Power overturned in rough seas and hurricane force winds on Tuesday. So far, eight of the 19 personnel who were on board the lift boat have been recovered, two of whom have died. Eleven remain unaccounted for.

The agency said it is not releasing the names of the man recovered or other mariners involved in the incident out of respect for the privacy of their family members.

The Coast Guard said it is possible that survivors could still be inside the capsized vessel. On Thursday, divers knocked on Seacor Power’s hull without hearing a response.

Divers returned to the scene at 7:50 a.m. Friday but had to resurface mid morning due to dangerous weather conditions before resuming around 1:30 p.m.

The 2,276 GRT lift boat, also called a jack barge, has three extendable 250-foot legs that can reach the sea floor and two 185-ton cranes. The vessel, often used by energy companies for offshore construction projects or to service oil rigs, is owned by Seacor Marine, a marine transportation company based in Houston. It was built by SEMCO in 2002 and is classed by ABS.

The incident has been declared a major marine casualty, and the National Transportation Safety Board (NTSB) will be joining the the Coast Guard-led preliminary investigation.