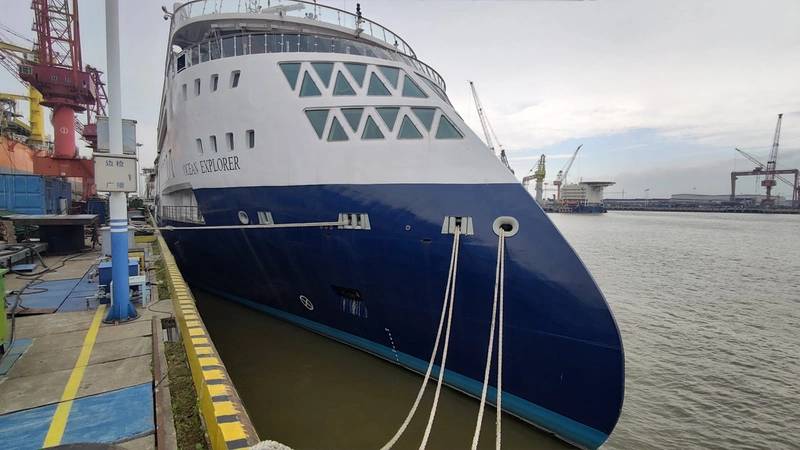 The newbuild will soon make its way to Manilla to pick up crew, followed by a short stop in Malta to get the remaining hotel crew and supplies before commencing cruises from Poole in the U.K. in late August. The vessel will make year-round expedition cruises worldwide for Vantage Travel.

Small enough to give an exclusive atmosphere and yet large enough to yield all expected services and facilities such as a swimming pool, bar and restaurants, lounges, boutique, gym and spa, each INFINITY Class vessel is 104 meters long and 18 meters wide, with a draft of 5.1 meters. They feature a passenger capacity between 130-200 and a crew capacity between 85 and 115.

The ships feature Ulstein Design & Solutions’ signature X-Bow hull shape, and they are Ice Class 1A, Polar Code 6 and are built with Safe Return to Port, dynamic positioning and Zero Speed stabilizers.

In addition to the Greg Mortimer and Ocean Explorer already delivered, other INFINITY Class newbuilds on order include Ocean Victory and Sylvia Earle slated for delivery in 2021, as well as Ocean Odyssey and Ocean Albatross for delivery in 2022 and the Ocean Discoverer due to be handed over in 2023. Each ship has a long-term charter agreement in place.