Posted by tesla@jabvertising.com on December 12, 2020 | Featured

Babcock awarded a £31.5 million contract to Robertson Construction for the development of a new Assembly Hall at its Rosyth site. The construction project will support circa 100 positions locally in Scotland and a further 100 positions nationally throughout the supply chain.
At a small Covid-19 safe ceremony marking the beginning of the steel structure construction, Babcock also announced that it has placed an order for PEMA welding and production panel lines to support the automation of shipbuilding.

This is part of a £55 million investment program currently underway on the site, on top of a further £100 million that has been invested over the last decade, ensuring Rosyth’s shipbuilding capability and capacity can be optimized to support further opportunities, with state-of-the-art engineering infrastructure and digital innovation at its heart.

The Assembly Hall will initially be used for the Type 31 general purpose frigate program and provides a modern, future-ready facility designed to assemble two vessels side by side. Free from weather disruption, the facility will enable productivity gains due to improved access and digital connectivity.

Advancements inside the Assembly Hall include the use of handheld devices that will underpin the efficient flow of materials with lean thinking applied to all aspects of the build and operations. Gantry stair access inside the structure also removes the need for traditional scaffolding, enabling safe access to the vessels without leaving the building.

Additionally, three new panel lines, a cornerstone of Babcock’s digital transformation at Rosyth, will create significant efficiencies in the manufacturing process. Work has already started on the refurbishment and extension of the existing manufacturing bay which will house the panel lines.

Each PEMA production line is based on modern shipbuilding technology that enables Babcock to raise its level of automation. PEMA Thin plate panel line is equipped with the latest technologies, such as plate edge milling and robotic welding which enable high-quality production of various panel types. PEMA T-beam fabrication line is designed to make straight T-beams without any additional straightening processes. 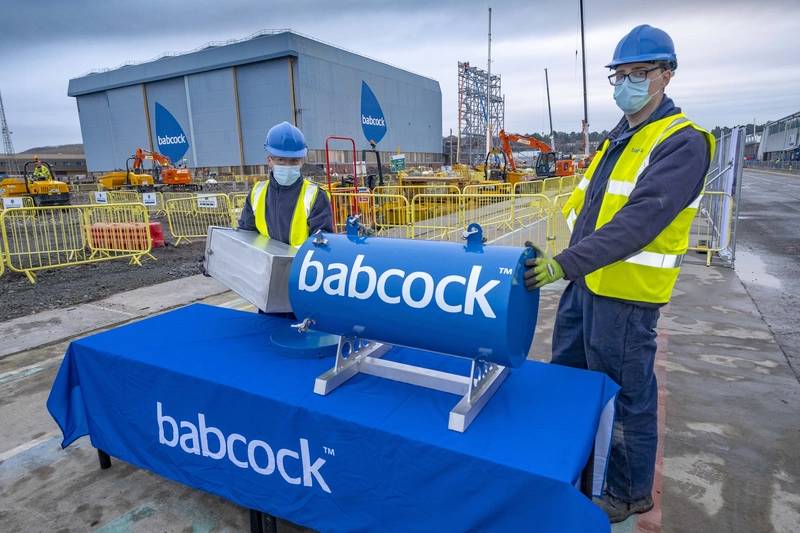 Babcock marked the new Assembly Hall construction milestone by burying a commemorative time capsule at the site of the new facility. Image: Babcock