Posted by tesla@jabvertising.com on June 27, 2021 | Featured

Crystal Endeavor, the 164 x 23-m, 20,200 GT ice-class expedition yacht was built at MV Werften and recently named in in Stralsund.

The first luxury expedition yacht with ice class built in Germany is being dubbed ‘the fastest, highest-performance and most spacious expedition mega yacht in its sector’ with a passenger space ratio of more than 100. Her Polar Class PC6 classification enables her to navigate Arctic and Antarctic regions. She offers a total of 100 suites of between 28 and 105 m² with 24-hour butler service for a maximum of 200 passengers. Six gourmet restaurants and a casino, a glass-covered, two-storey solarium, a spa and a fitness centre, as well as various lounges and shopping possibilities are provided on board. For expeditions by air and by water, “Crystal Endeavor” carries two helicopters, 18 Zodiacs (inflatable rubber boats), 14 kayaks and a six-guest submersible.

Jack Anderson, President and CEO of Crystal Cruises, praised the state-of-the-art technology, innovative design and high safety standards of the “Crystal Endeavor”, describing her as an “unparalleled and bold new expedition yacht made in Germany”. He also noted: “She is precision engineered to launch a new standard in global travel.”

“We have shown that under the most adverse conditions we in Stralsund can build ships of the greatest complexity that meet the highest standards,” said Peter Fetten, CEO of MV Werften. “‘Crystal Endeavor’ is a unique vessel that will represent the art of German shipbuilding throughout the world. We’d also like to take advantage of this special occasion to express our thanks to the federal government and state government for their commitment and support.”

The expedition yacht “Crystal Endeavor” is the ninth ship in the fleet of Crystal Cruises. Her maiden voyage is scheduled to commence in Reykjavík, her home port, on 17 July. 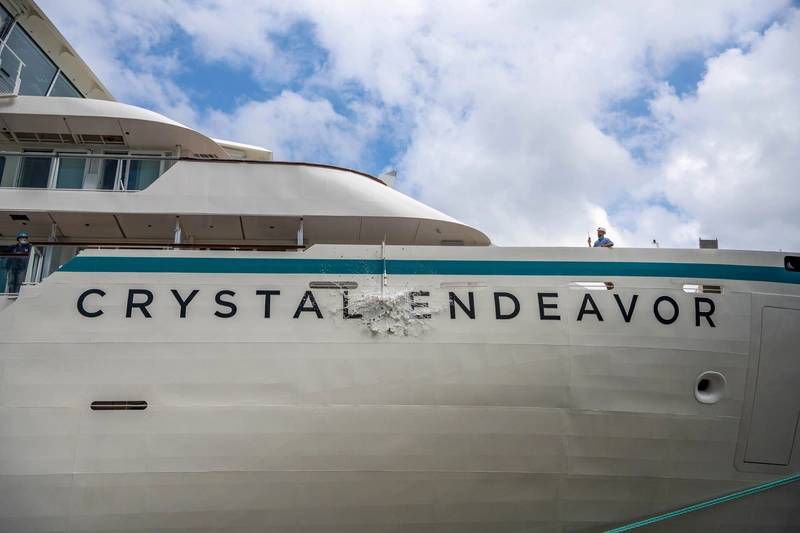