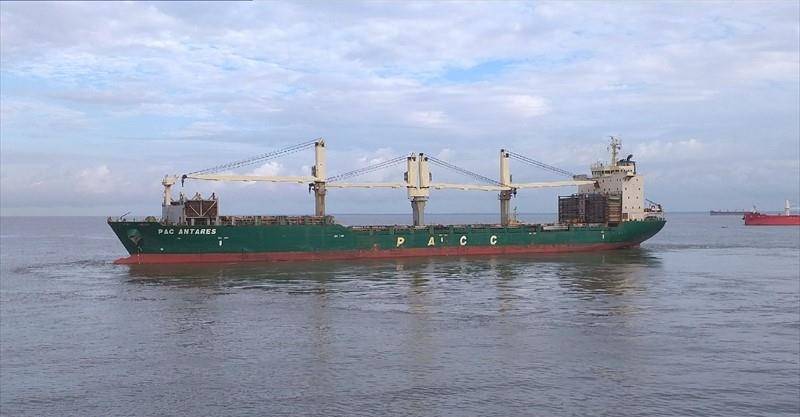 Pacific Carriers Limited (PCL), a Singapore-based company that owns subsidiaries engaged in international shipping, was sentenced today in federal court before U.S. District Court Judge Louise Flanagan in New Bern, N.C., after pleading guilty to violations of the Act to Prevent Pollution from Ships, obstruction of justice, and for a failure to notify the U.S. Coast Guard of a hazardous condition on the cargo vessel Pac Antares.

In pleading guilty, PCL admitted that crew members onboard the Pac Antares, a 20,471 gross-ton, 586-foot ocean-going commercial bulk carrier, knowingly failed to record in the vessel’s oil record book the overboard discharge of oily bilge water and oil waste without the use of required pollution-prevention equipment, from approximately April 2019 until the vessel arrived in Morehead City, N.C., on September 29, 2019. PCL also admitted that the crew discharged oily garbage and plastic overboard and falsified the garbage record book.

PCL also admitted that a large space along the keel of the vessel, known as the duct keel, was being used to store oily waste which constituted a hazardous condition under the Ports and Waterways Safety Act and it should have been immediately reported to the U.S. Coast Guard Sector North Carolina. The Chief Engineer, Wenguang Ye, pleaded guilty to falsifying the oil record book, and was sentenced to a fine of $5,500 and banned from entering the United States for one year after choosing to cooperate in the investigation. In 2008, the Pac Antares was involved in another prosecution in Wilmington, N.C., for concealing the overboard discharge of oily bilge water and assessed a total criminal penalty of $2.1 million.

“This kind of deliberate evasion of our pollution control laws will not be tolerated,” said Principal Deputy Assistant Attorney General Jonathan Brightbill of the Justice Department’s Environment and Natural Resources Division. “The Environmental Crimes Section proudly works hand-in-hand with U.S. Attorneys Offices and law enforcement partners around the country to investigate and prosecute the intentional violation of our laws that protect our oceans by commercial ship owners, operators, and personnel. It’s also essential that we demand the safe operation of ships in our ports.”

“The defendants in this case knowingly, intentionally and illegally discharged oily waste and other garbage into the waters along the North Carolina coast,” said U.S. Attorney Robert J. Higdon Jr. of the Eastern District of North Carolina. “That coastline is among the great natural treasures of this country and we are committed to its protection. To that end we will hold companies and individuals responsible when they fail to follow federal law designed to protect these valuable resources.”

“U.S. Attorneys all over the country work together enforcing federal laws,” said U.S. Attorney Ryan K. Patrick of the Southern District of Texas. “Some laws, like environmental crimes, can impact multiple districts at the same time. Foreign ships, because of corruption, incompetence or parsimony that dump their sewage or oil bilge in our waters will be held accountable. The Houston ship channel is a vital engine to the world’s economy and it requires all vessels to respect our laws if they want access to our port.”

“Safeguarding the environment is one of the highest priorities for the Department of Justice,” said U.S. Attorney Peter G. Strasser for the Eastern District of Louisiana. “The U.S. Attorney’s Office is committed to continue working with its federal partners to investigate and hold entities accountable when they neglect their professional and legal obligations and threaten the environment, which places the public and the ecosystem in Southeastern Louisiana at risk.”

“The Coast Guard remains dedicated to preserving the marine environment and protecting our living marine resources,” said Rear Adm. Laura Dickey, Coast Guard Fifth District Commander. “The results of this case showcase the commitment and meticulous efforts of our marine safety professionals, pollution responders and Coast Guard agents in North Carolina, and the great partnership we share with the Department of Justice.”

According to the plea agreement, PCL is the parent company of two other companies that owned and operated the Pac Antares. On September 29, 2019, the Pac Antares arrived in Morehead City, N.C. A crewmember walked off the ship and informed a Customs and Border Protection officer that he had information about illegal discharges that had taken place on the vessel. The U.S. Coast Guard was sent that information and conducted an inspection and examination. Examiners discovered and seized a large trove of evidence that oily waste and garbage had been discharged from the vessel to include a configuration of drums, flexible hoses and flanges to bypass the vessel’s oily water separator.

Examiners also discovered that oily waste had been discharged through a laundry sink which subsequently discharged directly overboard or through the vessel’s sewage system. Examiners discovered the sewage system was contaminated with oil. Crewmembers also admitted that bags filled with oily rags were thrown over the side of the ship. These discharges were knowingly not recorded in the Pac Antares’s oil record book and garbage record book when they were presented to the U.S. Coast Guard during the vessel’s inspection. The examiners also found over 60,000 gallons of oily water being stored in the “duct keel” which took several days and a third-party contractor to properly clean out.