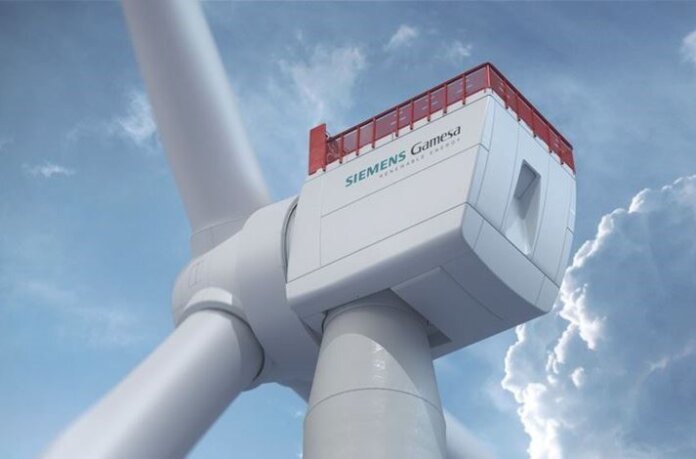 Siemens Gamesa has received a firm order for the delivery of 60 units of its SG 14-222 DD offshore wind turbine at the Moray West offshore wind power project. The wind turbines will have a capacity of 14.7 MW each and utilize the PowerBoost feature. A service agreement is included in the order for the 882 MW project located in Scotland’s Moray Firth. All 180 Siemens Gamesa B108 IntegralBlades will be produced at the company’s offshore blade factory in Hull, England. A rapid deployment timeline targets installation of the first machines in 2024, with first power being expected to be produced in 2024.

“Successfully signing the firm order for Moray West serves to further cement Siemens Gamesa as the leader of the offshore revolution,” states Marc Becker, CEO of the Siemens Gamesa Offshore Business Unit. “We were heartened to be named preferred bidder by Moray West in October 2021 and are now even happier to see their confidence in us become reality today. We’re able to contribute to both combatting the climate emergency and develop the world’s largest offshore wind market simultaneously.”

The Moray West project will be located over 22 kilometers from the Moray Council coast in the northeast of Scotland. The project’s rapid deployment plan is targeting installation of the SG 14-222 DD machines in 2024 with first power expected to be produced in 2024. Moray West will serve as the first serial installation of Siemens Gamesa’s 14 MW machine.

“Siemens Gamesa has made the largest investments in the U.K. offshore wind supply chain, with our Hull facility as the centerpiece,” continues Becker. “We’re proud to supply all 180 108-meter-long blades for the Moray West order from the expanded plant. As announced in August 2021, it will soon to be doubled in size compared to when it first opened. We continue to appreciate the support from the U.K. government in this development.”

“Following the earlier announcement that Siemens Gamesa were the preferred bidder, we are delighted to have finalized agreements for supply and installation of the SG 14-222 DD turbines and their servicing,” states Adam Morrison, project director for Moray West. “Siemens Gamesa has a strong track record, and this model will allow the next progression in efficiency for offshore wind power generation. We are particularly pleased that our early commitments to Siemens Gamesa will result in the first of the 108-meter blades from the expanded Hull facility being used on Moray West.”

“We look forward to working with Siemens Gamesa to ensure a smooth and safe installation program from the Nigg pre-assembly port as we move towards generation from this major renewables project – stepping towards Net Zero, increasing energy security and lowering the cost of energy,” Morrison adds.

Each SG 14-222 DD offshore wind turbine will have a capacity boosted up to 14.7 MW and feature a rotor diameter of 222 meters using 108-meter long Siemens Gamesa IntegralBlades. Launched in 2020, the first prototype of the massive machine was installed in 2021 in Denmark.