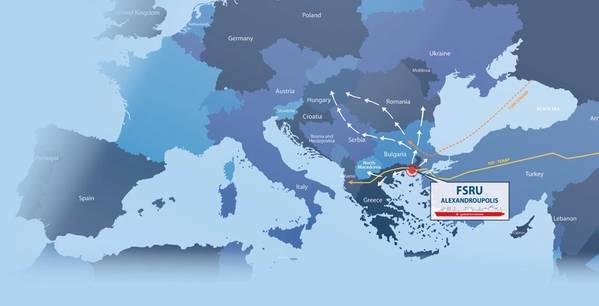 Greek gas grid DESFA, 66%-owned by a consortium led by Italy’s Snam, is interested in buying a stake in an offshore liquefied natural gas (LNG) terminal in northern Greece, people familiar with the matter said on Tuesday.

DESFA is considering taking a 20% stake in the consortium developing the Alexandroupolis LNG project, which is expected to be operational by 2023, the sources said.

The floating terminal, dubbed a project of “common interest” by the European Commission, will have a capacity of around 6 billion cubic meters of gas per year and will cost around 380 million euros ($448 million).

In Greek waters close to the Turkish border, it will be able to feed gas into other pipeline systems planned in the area, including the Trans Adriatic Pipeline (TAP).

“It fits Snam’s plans to expand its LNG capacity beyond Italy,” one of the sources said.

Snam, which has a 20% stake in TAP, operates LNG plants in Italy and, through DESFA, is currently bidding to run an LNG import plant in Kuwait.

The Alexandroupolis Independent Natural Gas System is 40% owned by Copelouzos, while DEPA, Gaslog and Bulgartransgaz each have 20%.