Berwick Bank and Marr Bank offshore wind farms, off the east coast of Scotland, have been brought together into one single wind farm – now known as Berwick Bank Wind Farm.

If consented, with a potential output of 4.1GW, Berwick Bank Wind Farm would more than double the size of current offshore wind either in construction or operational in Scotland at the moment. It would also increase the country’s overall renewable energy capacity by nearly 30%, SSE Renewables said. Worth noting, SSE is also involved in what is currently the world’s largest offshore wind farm under construction – the 3.6GW Dogger Bank, also in the UK. Read more.

The Berwick Bank Wind Farm project will be capable of generating enough electricity to power over five million homes, equivalent to all of Scotland’s households twice over, and avoiding eight million tonnes of carbon dioxide every year – similar to removing all of Scotland’s annual car emissions, SSE said.

According to SSE, Berwick Bank Wind Farm is already at an advanced stage of development, with a planning application which is expected to go to the Scottish Government in Spring 2022. 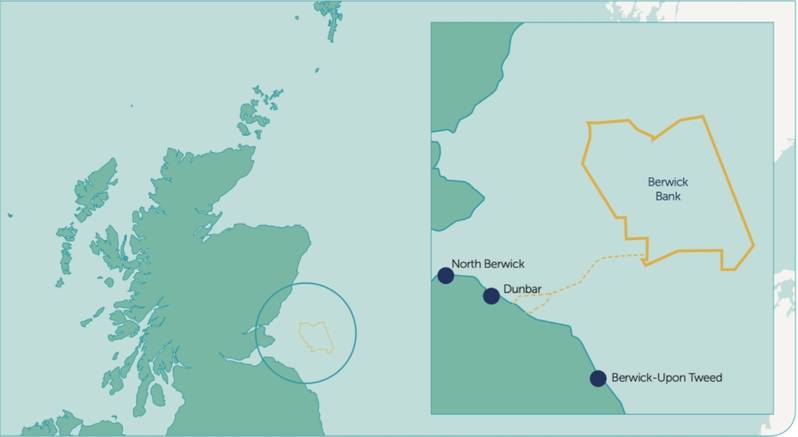 “If consented and greenlit for construction, [Berwick Bank Wind Farm] could begin generating clean electricity in the second half of this decade and play a key role in helping Scotland meet its near-term net-zero targets of generating up to 11GW new offshore wind by 2030,” SSE said.

Cabinet Secretary for Net Zero and Climate Change Michael Matheson said: “Decarbonising our energy demands is a vital component of our just transition to net-zero and our world-leading renewables sector will play a vital role in this. The continuing growth of offshore wind over the next decade will be crucial to meeting our incredibly stretching, near-term climate targets, and we will need to work innovatively, at pace and with agility to do so.”

“By combining the two project proposals into a super project we believe we can deliver Berwick Bank Wind Farm – one of the world’s largest offshore wind opportunities – more quickly.”

“We’re proud of our track record of support and benefits that our projects bring to the Scottish and UK supply chains. With Berwick Bank our ambition is to utilise as many local, Scottish and UK-based suppliers where possible throughout all stages of development, construction, and operation.

“That’s why we believe the size of Berwick Bank represents a huge opportunity to secure a multi-billion-pound investment in the Scottish and UK supply chain, bringing a wealth of opportunities for businesses of all sizes and disciplines.”