Stena Drilling Gearing Up to Add 7th Gen. Drillship to Its Fleet

Offshore drilling contractor Stena Drilling said in a social media post it was preparing to introduce the newest addition to its drilling fleet, the Stena Evolution drillship.

“The Stena Evolution will be a technologically advanced 7th Generation ultra-deepwater drillship, and demonstrates Stena Drilling’s continued commitment to driving innovation and performance in the ultra-deepwater sector, whilst safeguarding the environment,” Stena Drilling said Thursday.

“The Stena Evolution will be a fantastic addition to our fleet of high specification drilling units; one which will provide added value to prospective Clients through a combination of new technologies alongside Stena Drilling’s excellent HSE and Operational performance” Erik Rønsberg, CEO Stena Drilling. The company did not say when exactly the vessel would be introduced to its fleet.

To remind, Stena Drilling said in December 2021 that it had entered a purchase option agreement with Samsung Heavy Industries “for a drillship”.

The offshore drilling firm said at the time the agreement gave it the possibility to offer the market “a state of the art drilling services with minimal carbon footprint.”

CEOErik Ronsberg said at the time: “Our plan is to fit the drillship according to our specifications with hybrid technologies including the use of batteries. If we find a suitable contract, we will use the option to buy the unit.”

Stena’s December announcement came just days after Just a few days after the South Korean shipbuilder Samsung Heavy Industries said it had found a potential buyer for a drillship originally ordered in 2014, without revealing the buyer’s name. Samsung said that the delivery of the drillship was scheduled for the first quarter of 2023.

According to Korea Herald, the sale for the price for the drillship is $245 million. Samsung Heavy said the buyer must confirm the delivery date by mid-October, 2022, or risk losing the $15 million deposit given to Samsung. Samsung said the sale would reduce maintenance costs and bolster its liquidity.

To remind, Samsung Heavy Industries back in June 2021 signed a charter deal with Saipem for the first of the two drillships – the Santorini, with an option to buy. The drillship was delivered to Saipem in November 2021.

The Samsung Santorini is a seventh-generation drillship equipped with two Blow Out Preventers. The drillship is capable of operating at water depths up to 12,000 feet (over 3,500 meters).

With regards to what will become the Stena Evolution drillship, Offshore Engineer has reached out to Stena Drilling, seeking confirmation that the Stena Evolution is indeed the former Ocean Rig Crete, and that the company has exercised the purchase options with Samsung.

To remind, when announcing the Samsung deal back in December, Stena said it would use the option to buy the unit when it finds a suitable contract.

Erik Ronsberg, CEO of Stena Drilling responded to Offshore Engineer, confirming that the Stena Evolution drillship is indeed the one for which Stena secured the option in December 2021, previously known as ‘Crete’.

“We thought we’d post the proposed colors for the ship on social media to give an idea of what it will hopefully look like,” Ronsberg explained.

According to Ronsberg, Stena Drilling has yet to exercise its purchase option, since it is focusing on securing a drilling contract first.

Ronsberg said: “We are marketing the drillship for worldwide opportunities now, but it remains a purchase option for us until we have secured a suitable contract for it.  A Stena Drilling project team is now in place and are working on several initiatives for the ship, but we have not confirmed the final specification yet and would plan to do this together with an operator. “

“There is certainly a lot of interest in the ship and it is a very exciting opportunity for us, which we’re certainly hoping will come to fruition.” 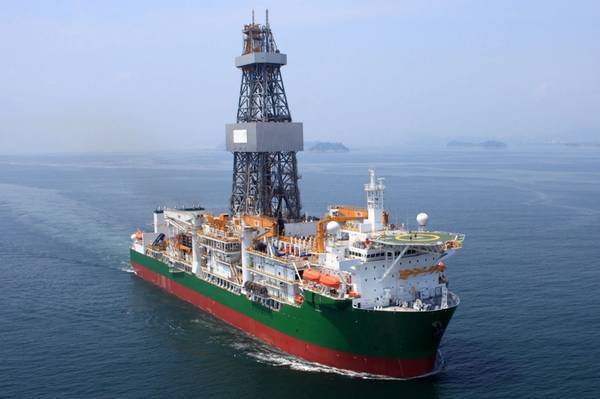