Taking the power to where you want it is another option – perhaps not for compression or pumping system, but potentially for monitoring, inspection, and even intervention systems, such as resident robotics concepts.

It’s an idea some have been looking at, such as Ocean Power Technologies, which recently won a DeepStar project award to study the deployment and operational requirements of using its PB3 PowerBuoy to provide remotely controllable power for deepwater subsea oil production applications.

Now Virginia, US-based Columbia Power Technologies (C-Power) has come up with what it’s calling an autonomous offshore power systems (AOPS) to support anything from a resident ROV to, potentially, even uncrewed surface vessel (USV) recharging.

Later this year, the SeaRAY system, which includes power, data, and communications, and could support short term (i.e. for a specific campaign) or longer term subsea power requirements, is set to be deployed on a six-month trial in 80m deep water at a US Navy Wave Energy Testing Site near the Marine Corps Base offshore Hawaii. 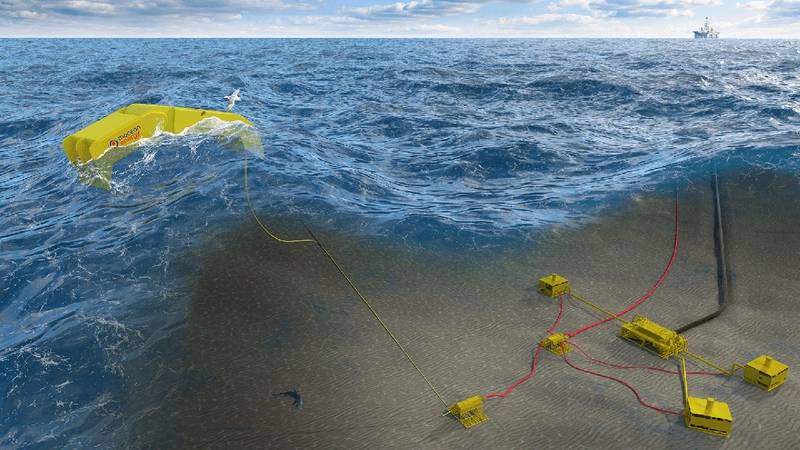 Next year, the firm hopes to deploy the system at a 500m deep site in the UK North Sea through a SMART: Scotland grant, before going even deeper. It’s also looking at campaign-based asset inspections for offshore wind, which could also be in UK waters.

Last year, it then worked on a US Department of Energy project, and the result was the SeaRAY AOPS, which can provide <1 kW to 20 kW. It also has DataRAY, providing <20 watts, and is working on StingRAY, to provide megawatt power needs.

Key requirements were that it could easy to transport (it fits in two containers), deployable with a small vessel and depth agnostic, says Lesemann.
Other potential uses include supporting leak or environmental monitoring, says Lesemann, or even replacing umbilicals in projects. Interestingly, Lesemann suggests this ethos, using small vessels to deploy a local subsea power, inspection, and or intervention provision could then change what types of vessels are used, by shifting what does what. Mix that in the USVs and the options open up even more.

Over in the UK, Edinburgh-based Mocean Energy is also looking to fuel subsea vehicles. The firm has designed a wave energy converter that it wants to offer to supply power to oil and gas facilities, including tie-backs and fleets of AUVs.

Earlier this year Mocean Energy announced a pilot project with the Oil and Gas Technology Centre (OGTC), oil major Chrysaor and subsea specialists EC-OG and Modus to study the potential to use their Blue Star prototype to power a subsea battery and a remote underwater vehicle.
Last year, Mocean Energy secured £3.3 million from Wave Energy Scotland to build and test a half-scale version of their technology at sea. The device is currently being completed at AJS Fabrication at Cowdenbeath in Fife.