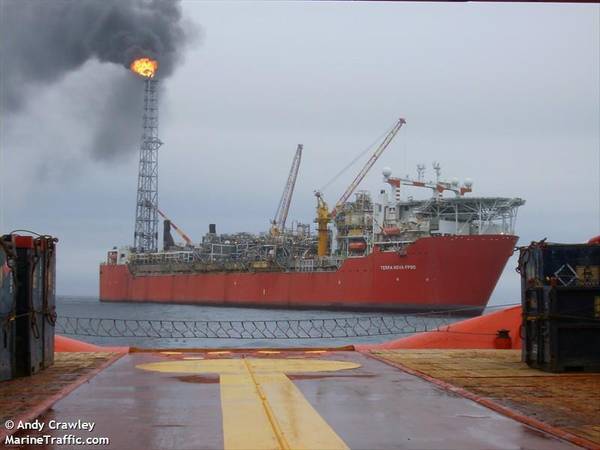 Canadian oil and gas company Suncor Energy said an agreement has been reached for the Terra Nova FPSO (and the namesake oil field) which was last year docked shoreside in Newfoundland after Covid-19 prevented the planned drydocking in Spain.

Suncor and its partners in the Terra Nova field in the Atlantic Ocean off Canada, in 2019 sanctioned the Terra Nova Asset Life Extension (ALE) project – aimed at extending the production life and capture approximately 80 million barrels of oil.

Under the plan, the field, located about 350 kilometers (220 mi) east off the coast of Newfoundland, Canada, was to go offline six to seven months in 2020, with FPSO planned to sail to a dry dock facility in Spain to undergo upgrades. Covid-19 then struck, and Spain was unable to accommodate the planned dry dock work due to the covid response measures.

After that, Suncor said it would temporarily move the Terra Nova FPSO from its offshore location and dock it shoreside in Newfoundland to evaluate options.

There were talks about potential decommissioning if no solution for the FPSO was found, with Newfoundland and Labrador Oil and Gas Industries Association NOIA advocating for asset life extension, citing a report which said the Newfoundland and Labrador provincial and municipal governments would receive a total of $1.49B over 10 years, including $880M in royalties, $120M in corporate income taxes, and $485M in other taxes if the project was to be extended.

In an update earlier this week, Suncor said the co-owners of the Terra Nova FPSO and associated Terra Nova field, had reached an agreement in principle to restructure the project ownership and provide short-term funding towards continuing the development of the Asset Life Extension Project, with the intent to move to a sanction decision in the autumn.

“A subset of owners will increase their ownership of the project for consideration payable from the other owners. Suncor’s ownership will increase to 48% from approximately 38%,” Suncor said, without providing the exact details on ownership changes for the other parties.

“The agreement is subject to finalized terms and approval from all Parties, including board of director approval where appropriate, and is contingent upon the previously disclosed royalty and financial support from the Government of Newfoundland & Labrador. Further details will be provided when agreements are finalized,” Suncor said.

“Over the past year, Suncor has worked diligently with all stakeholders to determine a path forward for Terra Nova,” said Mark Little, Suncor president and chief executive officer.

“Despite numerous setbacks, Suncor, as operator, continued to persevere and explore options to achieve an economic return for our investors while protecting the employment of hundreds of Newfoundlanders and Labradorians. Although this agreement in principle is not a guarantee, it sets a path forward in the next few months to secure a return to operations for many years to come.”

Worth noting, the production from the Terra Nova field has been offline since December 2019, after the oil regulator for the province ordered a shutdown, due to Suncor’s failure to meet requirements regarding redundant fire water pump systems on the FPSO.