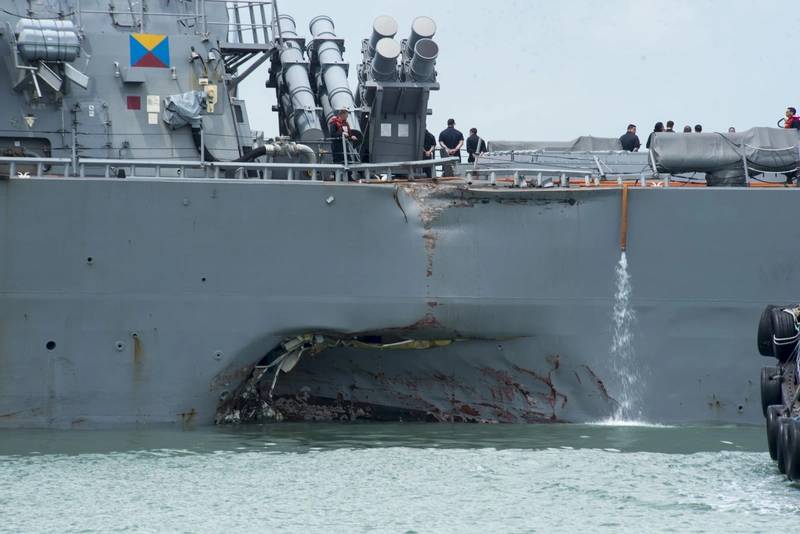 A U.S. judge on Wednesday said the owner of an oil tanker must pay the United States $44.6 million over its role in a 2017 collision between the tanker with a U.S. Navy destroyer in southeast Asia that killed 10 sailors and injured dozens more.

Both vessels had been cruising alongside each other when the McCain, a guided missile destroyer nearing Singapore for a routine port call, veered left.

The bow of the Alnic MC pierced the McCain’s broadside, causing the destroyer to flood.

Energetic Tank, which court papers say has an office in Monrovia, Liberia, sought to hold the United States responsible for the collision, which caused damage of $185 million to the McCain and $442,445 to the Alnic MC.

The United States conceded that the McCain bore some blame, but that the Alnic MC also played a role.

Absent objections, a second trial will apportion the money to victims and their families, the judge said. Forty-one wrongful death or personal injury claims were filed.

Neither lawyers for Energetic Tank nor the U.S. Department of Justice immediately responded to requests for comment.

Paul Hofmann, a lawyer for some of the claimants, said the “well-considered” decision will prove “some level of recompense” for sailors and families who suffered grievous injuries.

In 2019, the National Transportation Safety Board said the probable cause of the collision was “a lack of effective operational oversight of the destroyer by the U.S. Navy, which resulted in insufficient training and inadequate bridge operating procedures.” It recommended several safety measures.

The case is In re Energetic tank Inc as owner of the M/V Alnic MC, for Exoneration from or Limitation of Liability, U.S. District Court, Southern District of New York, No. 18-01359.