While much of the maritime world’s tech chatter focuses on emissions and fuel choice, Dutch water company Hatenboer-Water developed the Plastic Free @Sea concept as a smart solution to reduce plastic waste on board ships at sea.

Reducing plastic waste has become key in environmental protection, including in the shipping industry. Answering the call is Hatenboer-Water with its Plastic Free @Sea concept, designed to help shipowners reduce the tens of thousands of plastic water bottles on board to virtually zero, saving cost and handling time as a bonus with its onboard, contact free, filtered water bottle filling stations

Each water fountain features easy hands-free sensor activation, providing a sanitary, touchless bottle filling experience. The key components have an antimicrobial protection that inhibits the growth of mould and mildew. In addition, as crew members are often reluctant to drink tap water from the water tanks due to their past experience, Hatenboer-Water provides on- and offline training and information to get all crew acquainted with the ins and outs of the system.

The Plastic Free @Sea concept is a response to growing demands from the industry, explains Mark Knoester, Hatenboer-Water’s Sales Manager Water Quality: “Several frontrunners in our industry like Wagenborg and ALP contacted us. These organizations are eager to reach their sustainability goals and are looking for ways to act on them. When COVID came in, we switched gear to adapt and introduce contact-free tap points fast. Altogether it was quite easy to implement the Plastic Free @Sea concept for these customers, as they actively monitor onboard water quality. For those who fear low-quality water in their tanks, we’ve added a three-step filtration unit, including a reverse osmosis membrane. We can even do a risk assessment upfront to improve all water related assets on board. It all comes together: office staff likes the potential savings and the short return on investment, the fleet is happy with clean, good-tasting water. ”

Hatenboer-Water selected U.S.-based Elkay as the partner for the filling station as the company has a proven track record worldwide in a wide variety of industries. Elkay was able to alter the configuration of the stations to the wishes of Hatenboer-Water to withstand the sometimes harsh conditions of their customer base. The robust wall mounted stainless filling station provides chilled water and a ticker informs the users of the number of plastic water bottles saved from waste. Hatenboer-Water is offering customisable stainless steel reusable bottles to close the circle.

In addition, Hatenboer-Water worked with Pentair and their Everpure MRS-225 CC Reverse Osmosis Unit, a system tjat can dispense up to 850 liters per day. 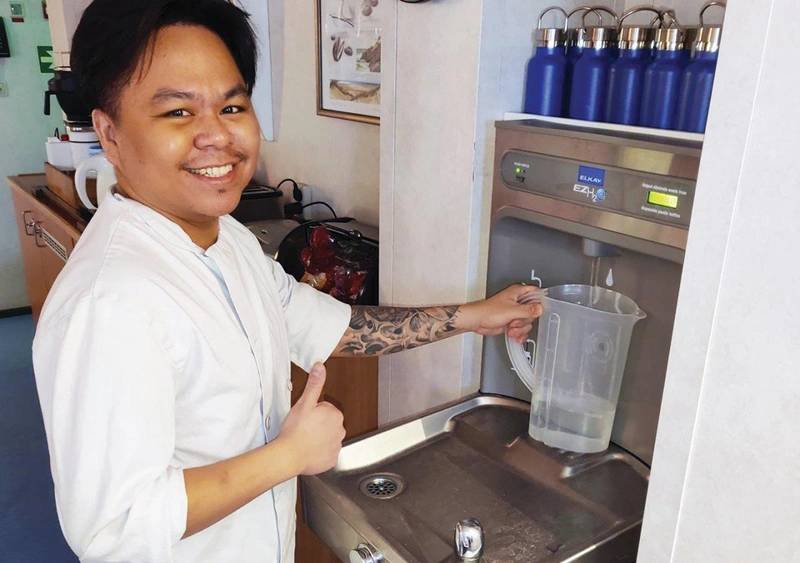 “On board of our fleet we supplied bottled water for consumption,” said Wagenborg Superintendent Izak van Rhijn. “These bottles are made of single-use plastic. Every year we supplied more than 179,000 plastic bottles, which resulted in 2.8 tons of plastic waste. That does not suit a company with ambitious sustainability targets. So we were very glad Hatenboer-Water offered a practical and long-term alternative with their bottle filling station. These units are equipped with special filtration equipment. The result is tasty fresh cooled water perfectly fit for consumption.”

Despite the obvious environmental benefits, the captain of MV Rijnborg found that convincing the crew took some time and effort. “In particular, the Filipino crew was skeptical beforehand: they are not used to drinking water from the tap,” said Gerard Zijlstra, Captain of the MV Rijnborg. “In addition, after installation we found out that the water in the drinking water tank on board was not according to the standard. This happened because the ship had been stationary for a while. We needed to clean and test the system to solve the problem with the drinking water tank, so we temporarily switched back to bottled mineral water. Once the problem was fixed, we put the clean water tap into use and I can only conclude that the bottle filling station works well. Despite the initial reluctance of a part of the crew and the start-up problems, now the entire crew makes full use of it.”