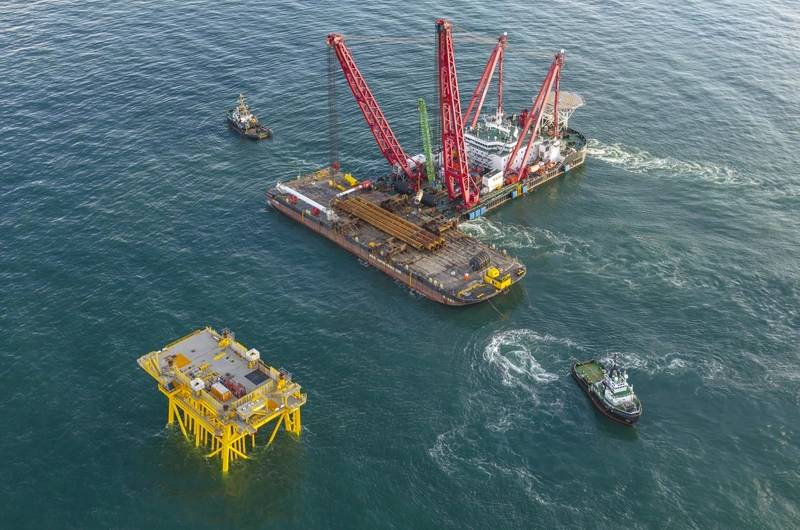 The jacket for TenneT’s Hollandse Kust (North) offshore wind substation has been installed off the coast of the Netherlands.

The next step for this offshore power station is that the ready-made topside containing the transformers will be placed on the jacket in May 2022.

“The construction will be ready in 2023 and TenneT will ensure that sustainable wind energy is transported to the onshore high-voltage grid,” Tennet said Friday.

After leaving the port of Vlissingen, the jacket arrived at its destination over 18 kilometers off the coast of Egmond in 20 hours.

After exact positioning at the site, the 2,100-ton steel structure was set on the seabed by the cranes on hoisting vessel “Gulliver”.

The jacket was secured at the four corner points using piles driven into the seabed to approximately 38 meters. The piles are large 10-meter tubes that are welded to the feet of the jacket. By filling the space between the piles and the tubes with grout, the platform will soon be able to withstand even the heaviest storm in the North Sea, Tennet said.

Prior to placement, the soil conditions on the site were carefully examined. It was also investigated whether there are any unexploded explosives from the Second World War. The contractor then poured a large bed of stones to create a firm and flat foundation. The stones also ensure that the soil under the jacket is not washed away by the flow of seawater. With regular maintenance, the structure has a minimum lifespan of up to 40 years, TenneT further explained.

According to the company, early next year, ahead of the topside placement, the power cables will be installed that will come ashore on the Heemskerk/Wijk aan Zee beach. These cables will be laid at a safe depth and connected behind the dunes to the land cables to the new transformer station at Wijk aan Zee to the national high voltage grid, Tenne said.

This concerns the wind farms in the wind energy areas Hollandse Kust (west), where TenneT will use three standardized 700 MW platforms (2.1 GW) for the first two areas.

“For the efficient connection of the wind energy areas further away in the North Sea, such as IJmuiden Ver (6 GW), other techniques are needed based on direct current instead of alternating current. At least three offshore connections of 2 GW each are being developed for IJmuiden Ver. The Ministry of Economic Affairs and Climate (EZK) is currently investigating further expansion possibilities,” the company said.