Time Running Out for Missing Indonesian Submarine as US Joins Search 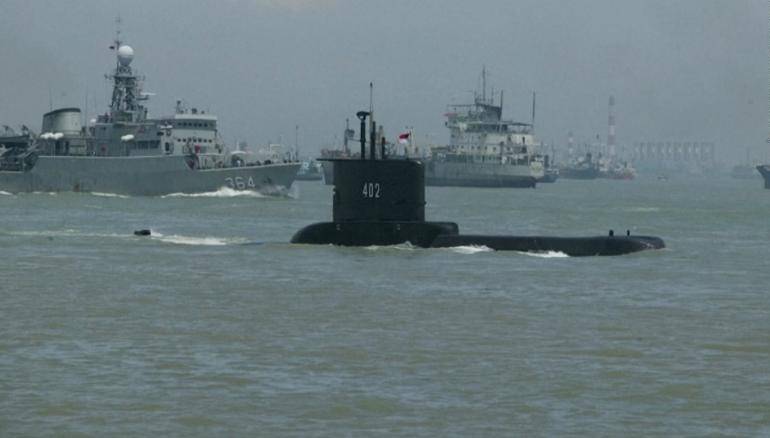 Rescue teams were battling against time on Friday to find a missing Indonesian Navy submarine lost in the Bali Sea with 53 crew, which would be rapidly running out of oxygen if not already crushed by water pressure.

Search helicopters and more ships left Bali and a naval base in Java heading to the area where contact was lost with the 44-year-old KRI Nanggala-402 on Wednesday as it prepared to conduct a torpedo drill, with the head of the Indonesian submarine fleet aboard.

If the submarine was still intact, officials said it would only have enough air to last until around dawn on Saturday.

“So far we haven’t found it… but with the equipment available we should be able to find the location,” Achmad Riad, a spokesman for the Indonesian military, told a news conference.

An Indonesian air force pilot said six tonnes of equipment had been flown to a base to help with the search including underwater balloons to help lift a vessel.

Indonesia’s navy said it was investigating whether the submarine lost power during a dive and could not carry out emergency procedures as it descended to a depth of 600-700 meters, well beyond its survivable limits.

An object with “high magnetic force” had been spotted “floating” at a depth of 50-100 meters, Indonesian Navy Chief of Staff Yudo Margono said, and an aerial search had earlier spotted an oil spill near the submarine’s last location.

The diesel-electric powered submarine could withstand a depth of up to 500 meters (1,640 ft) but anything more could be fatal, Navy spokesman Julius Widjojono said. The Bali Sea can reach depths of more than 1,500 meters.

One of the people on board was the commander of the Indonesian submarine fleet, Harry Setiawan.

An Indonesian defense expert said the crew could still be found alive.

“But if the submarine is in a 700-metre sea trough, it will be difficult for them to survive because underwater pressure will cause cracks and ruptures of the steel hull,” Connie Rahakundini Bakrie said.

Distraught relatives await news
The submarine joined the Indonesian fleet in 1981, according to the defense ministry, and underwent a refit in South Korea completed in 2012. It was said to be in good condition.

“I hope that they will be found alive,” said Berda Asmara, the wife of crew member Guntur Ari Prasetyo, 39, who has sailed on the Nanggala for 10 years.

“We had a video call. He told me that he would go sailing and asked me to pray for him,” she said of the last time they spoke.

Natalie Sambhi, an expert on Indonesian military and security at Verve Research, said the best case scenario was that the submarine was not at a great depth but even then the challenges were immense.

“When you factor in the oxygen levels for the actual number of crew and then the time it takes to locate, assessment of recovery, then engagement in that recovery that timeline looks even longer.”

Australia, India, Malaysia, Singapore and the United States have sent specialized ships or aircraft in response to Indonesian requests for assistance.

The U.S. Defense Department is sending “airborne assets” to assist in the submarine search, a Pentagon spokesman said.

Two Australian Navy ships were heading for the search area including a frigate with special sonar capabilities, the defense department said.

It has been seeking to modernize its defense capabilities but some of its equipment is old and there have been fatal accidents in recent years.