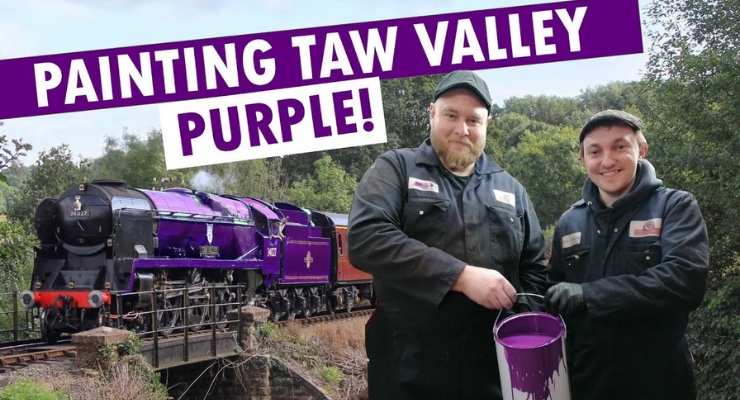 One of the world’s most historic paint specialists, whose products are used across the British Royal Household, is ensuring a landmark project to mark the Queen’s platinum jubilee goes full steam ahead in a unique way.

T&R Williamson, holder of the prestigious Royal Warrant, has played a key role in transforming one of the country’s most popular steam locomotives into “Platinum Purple.”

As well as its eye-catching new livery, the Taw Valley locomotive will be renamed Elizabeth II following a public vote carried out by its custodians Severn Valley Railway, which operates a 16-mile heritage line in Shropshire and Worcestershire.

The initiative has even caught the imagination of leading British model company Hornby, which is producing a limited-edition collector’s model of the new-look locomotive, with just 1,500 available.

This Royal repaint is the latest in a long line of flagship heritage projects where restoration experts have turned to Ripon-based T&R Williamson’s specialist paints and protective coatings to help bring them to life.

These include Stephenson’s Rocket, The Flying Scotsman, The Orient Express, The Royal Opera House, Golden Gate Bridge, as well as The Royal Mews and Royal Carriages.

“Being awarded a Royal Warrant of Appointment in 2011 marked one of the proudest moments in our 247-year history,” said group chairman Abubaker Sheibani. “We are one of fewer than 800 specialists-in-their-field globally to achieve this prestigious and rare accolade.

“So, we are thrilled to have been able to extend this Royal connection to this unique project. It is a fitting and truly memorable way of commemorating Her Majesty becoming the first British Monarch in history to reign for 70 years.”

The train was repainted in T&W Williamson’s Spec 81 paint, Purple SP01353, to match the official color of the platinum jubilee, and its Spec 81 Undercoat Madder.

Taw Valley – named after a river in Devon – was built in 1946 and operated in Ramsgate, Brighton and Salisbury before being withdrawn from service in 1964.

It was later rescued from a scrapyard in Wales by Bert Hitchen, the former road cycling champion from Mirfield in West Yorkshire, UK, who became increasingly involved in railway preservation after leaving the sport. Its restoration began at the North Yorkshire Moors Railway before entering service at Severn Valley Railway in 1988.

The name change and repaint will only be a temporary measure – later this year the locomotive will be restored to its original name and green livery.
“This is all about making the biggest impact possible,” said Severn Valley Railway chairman Mike Ball.

“We’re putting a huge amount of effort into our celebrations for both The Queen’s Platinum Jubilee and the 2022 Commonwealth Games which are being held in Birmingham. We’re sure that the unusual appearance of the loco will prove a huge draw to visitors.”

T&R Williamson, founded in 1775 and believed to be the oldest family-operated paint manufacturer still in existence worldwide, is part of the privately-run Sheibani Group.

The group’s growing portfolio of UK businesses also includes Midlands-headquartered Thomas Howse Paints, which was established in 1903; and the Leeds-based Metprint Ltd, a metal packaging specialist.

All three group companies have pooled their expertise to create a 500ml tin in “Platinum Purple” paint for clients to keep as a souvenir of the occasion.

The tin will be filled with traditional sweets and the lid will feature a coin slot so that after the treats have been eaten, it can be used as a savings tin for future generations.