For almost three months now, the spot freight rate for containerized goods shipped by sea from North Europe to the U.S. East Coast has been 210% higher than last year (July 1 – September 23), according to shipping organization BIMCO.

It wasn’t until April 1, 2021 that we saw the ripple effects from the globally stretched supply chains impacting front-haul freight rates on the Transatlantic container shipping trade lane. At that time, spot freight rates for a 40-foot container jumped 52% from $2,329 to $3,544 on average for the trade lane. The Transatlantic average spot rates continued to climb, reaching $5,798 per FEU on July 1 before flatlining just south of $6,000 reaching $5,893 per FEU on September 23, 2021. 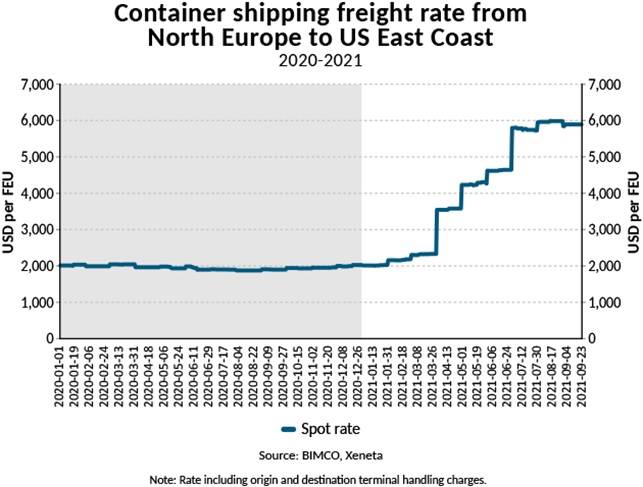 “Imports to North America from Europe have increased by little more than 500,000 TEU from last year and liner operators have responded by deploying significantly more capacity on that trade,” Sand said.

In a bid to match container shipping capacity to the higher demand, liner companies added 21.4% of cargo carrying capacity in the 12 months from July 1, 2020 to July 1, 2021.