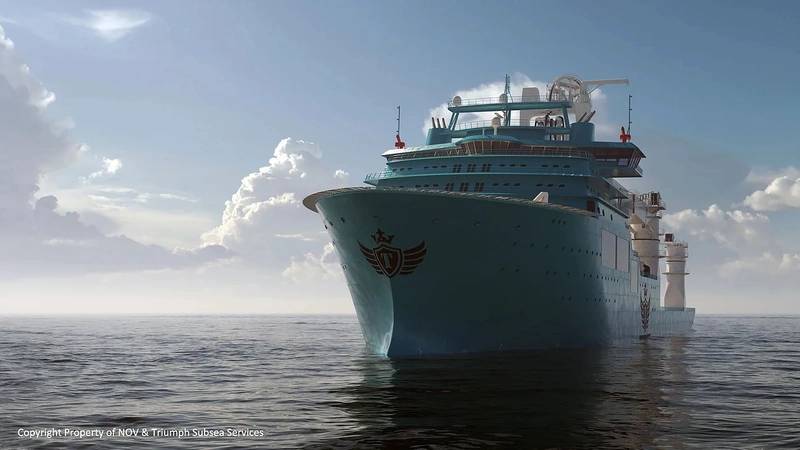 Triumph Subsea Services said Thursday it had formally canceled the Letter of Intent that was issued to Infrastrata in December 2020, for the construction of an offshore wind development vessel and said it didn’t want to build any vessels with InfraStrata and or any of its shipyards.

The two companies had signed the Letter of intent for one firm and one optional ST designed 200m x 35m Windfarm Development Vessels (WDV), for floating windfarm installations, cable laying, and providing marine services for offshore carbon capture and green hydrogen projects. The vessels were to be built at Infrastrata’s Harland & Wolff Shipyard in Belfast, Northern Ireland.

Infrastrata said at the time that, once contracted, each vessel would be expected to generate revenues for Harland & Wolff of between £340 million and £360 million over the 24-30 month period of fabrication, followed by additional revenues if further through-life support contracts were secured.

However, come June 30, 2021, Infrastrata said it had set aside the Triumph project “for the time being as we do not have a high enough level of confidence in this project progressing to speculatively invest heavily in it at this time.” A day later, Triumph said it had canceled the LoI.

In its statement Thursday, Triumph said: “Following Triumph’s business model of building and operating vessels with maximum local content these UK-built vessels would have provided numerous employment opportunities for the UK supply chain. These opportunities would also have existed during the vessels execution of UK renewables projects as the vessels would have been crewed and operated by UK personnel,” Triumph said.

It’s worth noting, Triumph in December 2020 also ordered a subsea construction vessel from a shipyard in Croatia, so it’s unclear what the company means exactly by its “maximum local content” business model.

Back to the offshore wind vessel story, Triumph said its decision to cancel the LoI had not been taken lightly, however, it said it was left with no other option.

The company said it had “to-date” not received any formal commercial quotation and or vessel build schedule, and that based on not receiving “this vital information that forms part of a shipbuilding contract, no contract could be agreed or signed.”

Triumph also said that without a formal commercial quotation and build schedule “no discussion could proceed forward with any of the financial institutions that had been supporting Triumph with this project.”

“Triumph did however have a Teams call and video presentation with Harland & Wolff on the 11th of March 2021 wherein an ad-hoc presentation was shown to Triumph, the presentation consisted essentially of a Very Rough Order Magnitude price and an equally rough schedule. The VROM and rough schedule was significantly different to the £340 million and £360 million over the 24-30 month periods agreed as per the LoI,” Triumph said.

No intention of building vessels in Infrastrata’s shipyards

Regarding Infrastrata’s statement on “setting aside” the Triumph project, Triumph said the statement was “completely erroneous, misleading and a false representation of the truth.”

“The initial misleading fact is that Triumph is unaware of the LoI being “set aside”, Triumph has canceled the LoI and has no intention of executing any vessel builds with InfraStrata and or any of its shipyards. The other key point is that this was posted on the London Stock Exchange website at 0700hrs on 30th June 2021, this was before the validity expiration of the LoI and without stating that Triumph had actually issued a termination letter to InfraStrata.

“Furthermore, if InfraStrata considers putting together a formal quotation and schedule as “investing heavily”, then they should reconsider if they want to be in the shipbuilding, renewable or energy sectors as putting together formal quotations is a key component to actually getting to the point of being in an ‘effective contract’,” Triumph said.

The company also suggested that InfraStrata may not have been financially capable of executing the contract with Triumph, citing Infrastrata’s share placing announcement from May 4, aimed at raising cash to fund fabrication work for a Saipem contract.

“Triumph is more than willing to have a discussion with the BOD of InfraStrata and the five main institutional investors. Alternatively, the shareholders of InfraStrata could request an EGM and invite Triumph to attend and discuss the LoI termination.”

“As a UK entity, Triumph believes it is a grave shame and travesty that key strategic maritime assets such as the H&W shipyard and other fabrication yards within the InfraStrata portfolio are not being utilized to their full potential, nor are they being used to assist the UK Government in its decarbonization and Net Zero aspirations,” Triumph said.

The company further said it remained “fully committed” to building its vessels in the UK and “therefore we welcome discussions with any UK shipyards and or consortium of UK yards that are able to execute the build of vessels.”

Offshore Engineer has reached out to Infrastrata, seeking comment on Triumphs claims and accusations.

The Infrastrata CEO John Wood told Offshore Engineer the company was reviewing Triumph’s announcement and would release a statement if required.