Tug and Barge Transporting Munitions Run Aground on Florida Beach 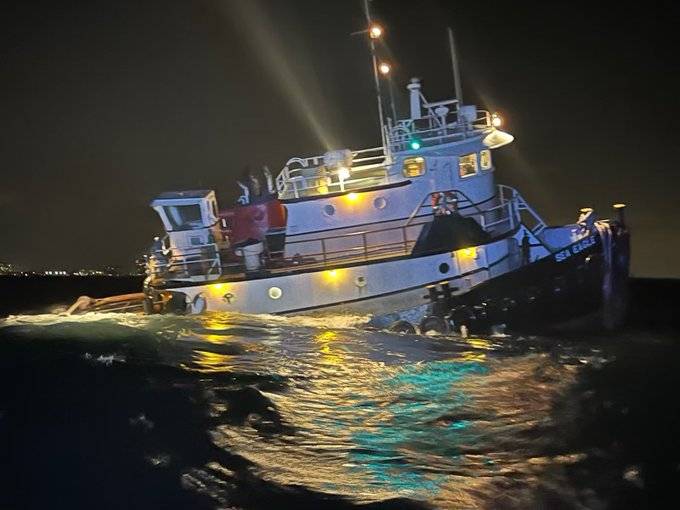 A tug and barge ran aground Thursday night near Deerfield Beach, Fla., while transporting munitions from Port Canaveral to a U.S. Naval facility in the Bahamas.

The U.S.-flagged tug Sea Eagle had four people on board when it began taking on water and went aground at 8:45 p.m. on Thursday, the U.S. Coast Guard (USCG) said. No injuries or pollution have been reported, and both the tug and barge are said to be in stable condition.

Three of the crew members were rescued from the attached barge by Customs and Border Protection Air and Marine Operations (CBP AMO) rescue crews. The Sea Eagle’s captain initially remained on board the 70-foot tug, but was later rescued by a USCG Station Fort Lauderdale crew. All four mariners have been brought to shore.

The tug is operated by Northcliffe Ocean Shipping & Trading (NOSAT), which runs a weekly liner tug and barge sailing for Military Sealift Command, between Port Canaveral and Andross in the Bahamas, servicing the Navy’s Atlantic Undersea Test and Evaluation Center. The barge is carrying ordnance, fuel and other supplies for the facility, the Coast Guard said.

USCG Sector Miami’s Incident Management Division is working with the responsible party and a hired salvage company to respond to the incident. Personnel are taking steps to mitigate the risk of pollution, including working to remove fuel and oil. The tug is reported to have approximately 10,000 gallons of diesel fuel on board.

The Navy Explosive Ordnance Disposal Mobile Unit Six (EODMU 6), Det. Mayport will clear the barge of any potential munitions or ordnance on board before salvors refloat the tug and barge and tow them to a nearby port.

Mariners and beachgoers are being urged to stay away from the site. A 1,000-foot security zone on the beach and 1,000-yard security zone on the ocean side around the site have been established. Shoreside beach access and physical security is being maintained by Deerfield Beach, Boca Raton, and Broward County Sheriff’s office.