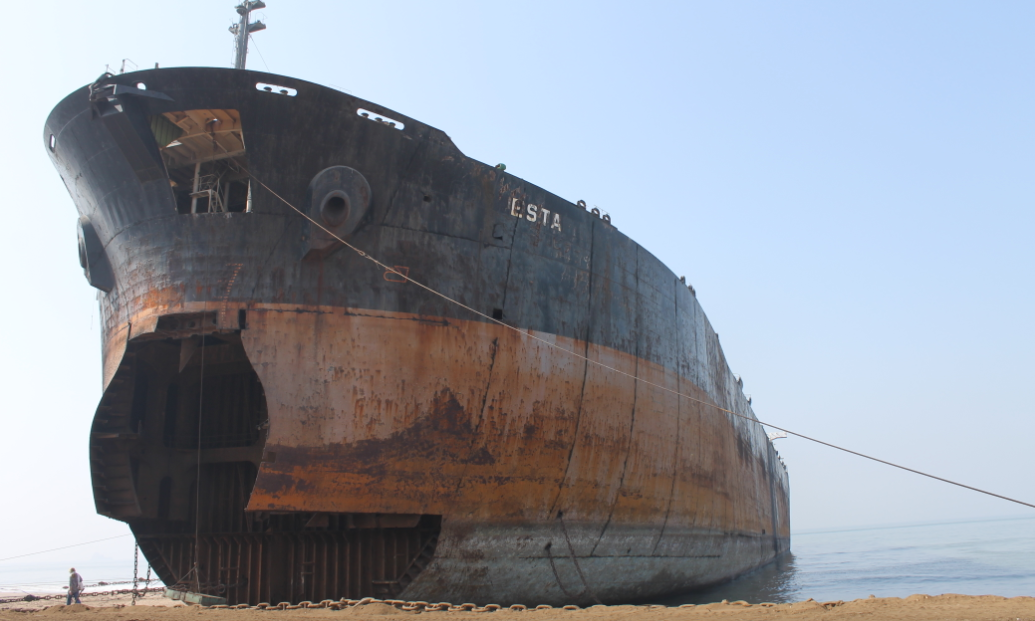 Icelandic transportation Eimskip has reportedly sold two of its containerships to dirty and dangerous scrapyards in India.

An investigation revealed that the ship pair, Godafoss and Laxfoss, was sold by Eimskip at the end of 2019, according to the NGO Shipbreaking Platform. The shipping company simultaneously agreed with the buyer to charter the vessels back until Eimskip’s newbuilds were delivered.

VesselsValue’s data shows that 1,465 TEU ships Godafoss and Laxfoss were sold to Liberia-based entities, Nova One Maritime Inc. and Melinda Maritime in December last year. Subsequently, both ships were delivered to Indian scrapyards in June 2020.

“What may have seemed like a sale for further operational use was actually a scrap deal – Eimskip’s counterpart to the sale was none other than GMS, one of the most well-known cash buyers of end-of-life ships,” NGO Shipbreaking Platform said.

“GMS is behind nearly half of the total tonnage that has been beached in the Indian subcontinent so far in 2020. The company has also been linked by media and civil society to several toxic trade scandals, at least two of which are currently being criminally investigated by enforcement authorities in the UK.”

The investigation was released on 24 September by the Icelandic program Kveikur. In a documentary broadcasted by radio and television Ríkisútvarpið (RÚV), Kveikur uncovers the illegal export of the boxship pair to the Indian beach of Alang. The Icelandic authorities have confirmed that the case has been brought to the public prosecutor for further investigation.

In an interview with RÚV, and in response to Kveikur’s documentary, Iceland’s Environment Minister Guðmundur Ingi Gudbrandsson said: “First, I am shocked over what I saw. You feel sad and, at the same time, angry that a company in the West would exploit vulnerable people that have no choice but to work under such horrible conditions. Workers are at constant risk of accidents and even losing their life, and environmental issues are given zero attention.”

“The owners of these companies must respond to whether this is, in their view, morally acceptable, and if this is in line with the environmental and social responsibility policy that they set for themselves. That is the question that I, and I believe many others, were left with.”

Eimskip allegedly denies any involvement in the decision to sell the ships for recycling and claims having been in the dark about their final destination, the NGO added.

The company is yet to provide a comment on the involvement in the matter to Offshore Energy – Green Marine.

“It is hard to believe Eimskip when they claim that they were unaware of the final destination of the vessels. Companies have a duty of care and responsibility to ensure that their operations follow environmental law, also within their supply-chain. Due diligence when selecting business partners is part and parcel of that responsibility,” Ingvild Jenssen, Director of the NGO Shipbreaking Platform, commented.

The sale of the two Eimskip vessels to South Asia was in clear breach of European waste laws, which prohibit the trade of hazardous waste, including end-of-life ships, from OECD countries to non-OECD countries.

Both ships were in European waters when the decision to sell for scrap was taken. Before reaching the Indian beach of Alang, via Suez, they briefly stopped in Rotterdam and Athens respectively. At the time of the export of the ships, the NGO Shipbreaking Platform formally requested Icelandic, Dutch and Greek authorities to hold all the parties involved in the sale accountable for breaching EU waste legislation.

A total of 674 ocean-going commercial ships and offshore units were sold to the scrapyards in 2019. Of these vessels, 469 large tankers, bulkers, floating platforms, cargo- and passenger ships were broken down on only three beaches in Bangladesh, India and Pakistan, amounting to near 90% of the gross tonnage dismantled globally.