In a statement on Wednesday, the company called Aegir Insights first pointed to the positive effect of Joe Biden’s election on the offshore wind industry in the country, and his appointment of Amanda Lefton as head of the U.S. offshore energy industry regulator Bureau of Ocean Energy Management (BOEM).

Further solidifying the expectation of an offshore wind boom in the U.S. is the new Investment Credit Tax (ITC) specifically for offshore wind projects, which Congress passed in December 2020. This 30% tax credit expires in 2026 and will push offshore wind developers to begin their projects before the deadline, the company added.

While the first offshore wind projects to be realized are all located off the East Coast and will be bottom-fixed, Aegir says that the waters off the West Coast, which offer some of the best wind resources in the country, are too deep for anything but floating offshore wind farms.

“The same goes for Hawaii and certain areas off the northern East Coast, where deeper waters might be utilized for floating offshore wind as states run out of feasible shallow sites,” Aegir said.

If the states around the Great Lakes want to exploit their strong winds, floating turbines further from shore will be preferred to protect the shoreline views, which are valuable to both homeowners and tourism, the company added.

Aegir Insights forecasts a build-out of floating offshore wind of between 6 and 11 GW by 2035 in California, Oregon, Hawaii, Michigan, New York, and Maine, with the base case giving a result of 9 GW.

“As Wood Mackenzie estimates a 34 GW offshore wind build-out by 2035, our base case indicates that approximately 25% of overall U.S. offshore wind capacity could come from floating wind in 2035,” Aegir Insights said.

Worth noting, there is currently only around 100MW of installed floating wind capacity in the world. 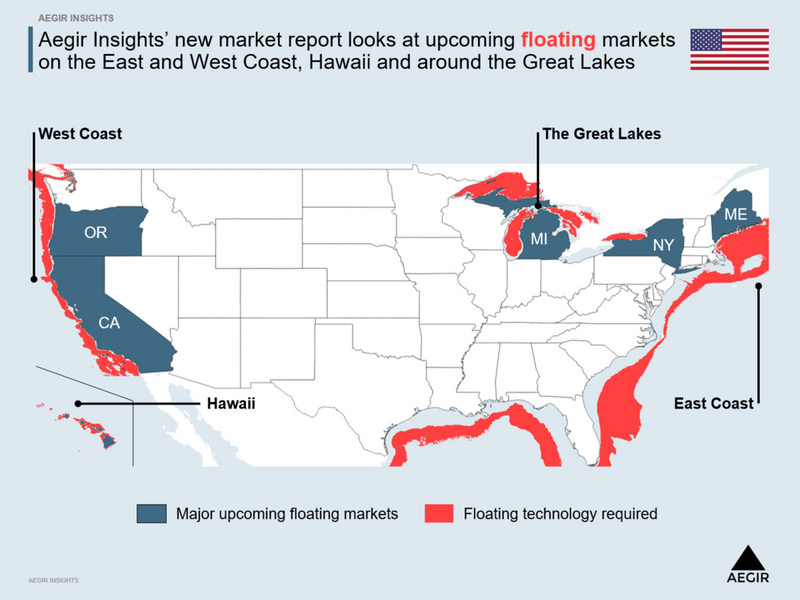