U.S. to China Trade: Trade Volume Up, But Far Short of Target Goals 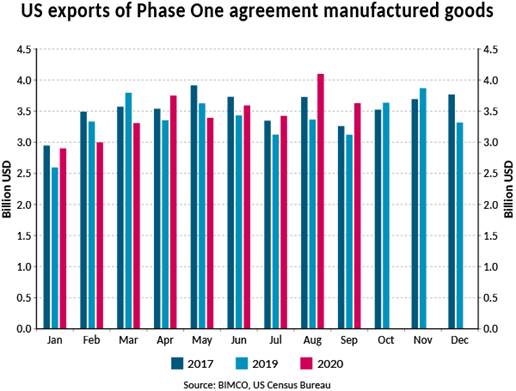 According to BIMCO, 40% of Phase One goal reached for US manufactured goods to China

Exports from the US to China of the manufactured goods included in the Phase One agreement between the two countries reached $31.1 billion in the first nine months of the year. This is just 40% of the $78.4 billion commitment under the agreement.

“BIMCO has always believed the targets were unachievable, but every additional volume shipped has been welcome, particularly when it comes to dry bulk and energy goods,” says Peter Sand, BMICO’s Chief Shipping Analyst. “The extra containerized goods resulting from the effort to comply with the agreement don’t bring as much of a boost as dry bulk and energy,  because the extra containerized volumes are on the backhaul of the transpacific trade rather than the money making and capacity setting fronthaul,” Sand says.

In September, $3.6 billion worth of the manufactured goods were exported, a decline from the record $4.1 billion in August, but still considerably above 2019 values, and above the values of 2017, which is  the baseline year upon which the agreement was built.

In the first nine months of 2020, exports of the manufactured goods included in the agreement are up 4.5% compared with 2019, but down 1.4% from the same period in 2017. To meet the obligations under the agreement, exports will therefore need to rise 72% in 2020 as a whole compared to 2017. In other words, $15.8 billion worth of exports must be realised every month of October, November and December to comply.