Royal Marines from the UK Navy’s HMS Montrose Frigate have seized  £11 million (USD 15,3 million) worth of illegal drugs in two raids of suspect vessels in the Arabian Sea, the UK Ministry of Defence and the Navy said in statements on Wednesday.

The Royal Marines seized 2.4 tonnes worth of illegal drugs from a suspect boat in the Northern Arabian Sea, on a counter-narcotics patrol. This was the second drug bust by the HMS Montrose crew in two days.

According to the statement by the UK government, in an operation lasting over 10 hours, 2.4 tonnes of heroin, crystal methamphetamine, and hashish were seized.

The Navy said the marines had found an ‘Aladdin’s cave’ of illegal narcotics: hundreds of bags and sacks of hashish, heroin, and methamphetamine.

“Everywhere we looked onboard there were suspicious packages,” said boarding team leader Lieutenant Gorton RM. “We soon realized how much we had interdicted.”

This came just two days after a separate bust in which HMS Montrose – which is based in Bahrain on a three-year security mission – seized 275kg of heroin from another suspect boat in the area.

“Having secured the vessel with my Royal Marines, we discovered the drugs in large bundled sacks, all containing individually wrapped packages. As soon as we opened the bags we were pretty confident it was an illicit substance,” Lieutenant Gorton RM said of the first bust.

The combined haul of drugs has an estimated wholesale value of £11 million (USD 15,3 million), according to the statement by the UK Ministry of Defence.

“The operations have prevented large amounts of illicit drugs potentially entering the UK and being sold on British streets, and the seizures help deny criminals an income source often associated with the funding of terrorism.

“Our adversaries will use any and all means to achieve their objectives and undermine our interests. As a responsible nation with global interests, and to keep the UK safe in this changing world, the defense is stepping forward to play our part in these international operations targeting the smuggling of illegal substances,” the statement by the UK Ministry of Defence further reads. 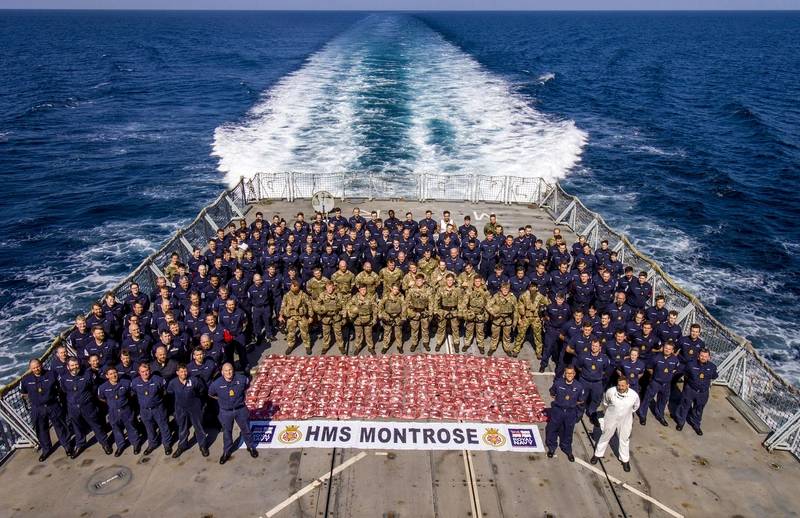 Montrose ship’s company with drugs from the first bust / Credit: Royal Navy Minister for the Armed Forces James Heappey said: “The Royal Navy and Royal Marines have once again proven their professionalism and operational capability in seizing illicit substances in transit.”

“The Armed Forces are committed to tackling organized crime around the world. The Royal Navy works with our allies in the Coalition Task Force to protect our people and our interests.”

“As a result of these operations, Britain’s streets are safer and a possible source of terrorist financing has been choked off.”

HMS Montrose is part of the Combined Maritime Forces (CMF), a multi-national force of 33 nations currently led by the Royal Canadian Navy, working in the Gulf region to disrupt criminal and terrorist organizations and their illicit activity. Coalition Task Force 150, as part of the CMF, operates to disrupt the activity of criminal organizations, in particular narcotics and weapons smuggling.

HMS Montrose last made a drugs bust in October 2020 when sailors and marines seized 450 kilograms of methamphetamine, with a wholesale value of £18 million, which was the largest ever seizure of methamphetamines by the Royal Navy in the Gulf. 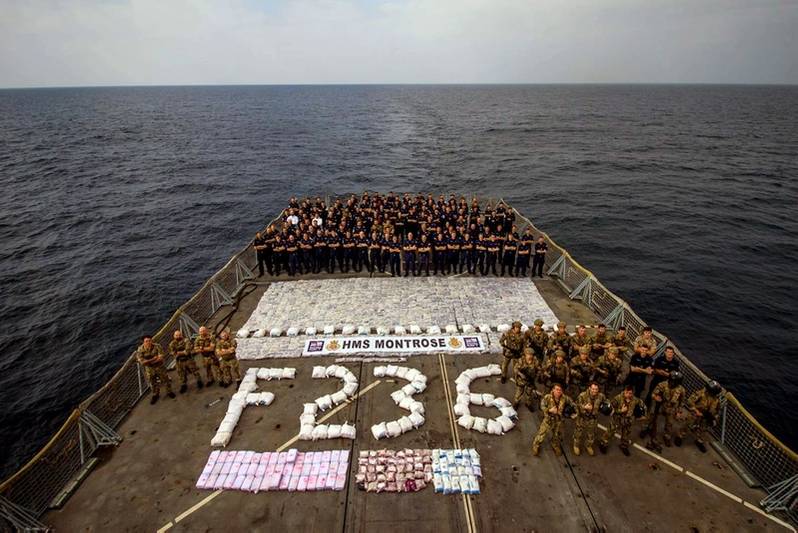 Montrose Ship’s company with the drugs from the second bust  Credit: Royal Navy  A spokesperson for Combined Maritime Forces said: “The Royal Navy, working with the Combined Maritime Forces, has carried out another successful operation to stop illicit substances reaching Europe. This builds on the Royal Navy’s fantastic work in the Caribbean during the hurricane season, where £360 million worth of drugs were seized across an eight-month period.”

HMS Montrose is the Royal Navy’s Forward Deployed Frigate in the Gulf and has been in the region since leaving its base port of Devonport in early 2019.