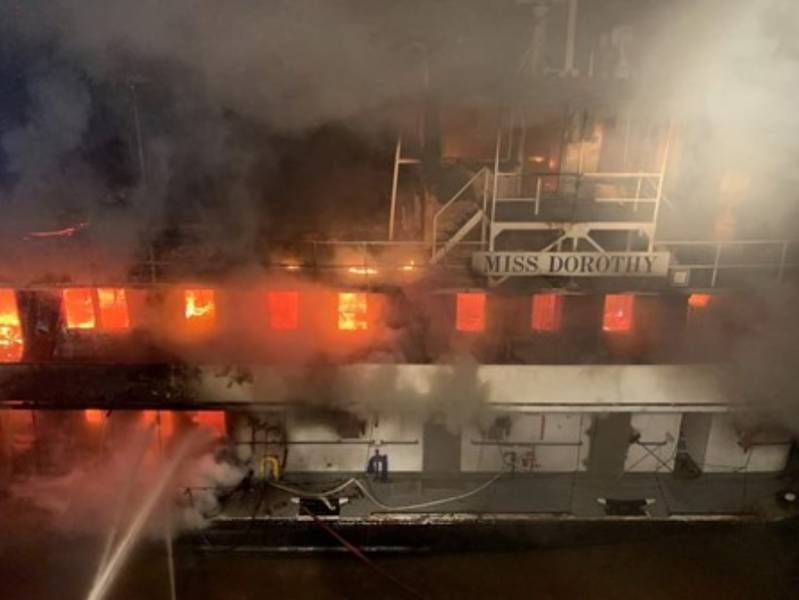 An engine room fire aboard a towing vessel was the result of spraying diesel fuel hitting an uninsulated section of the engine’s exhaust system, the National Transportation Safety Board (NTSB) said in a marine investigation report released Tuesday.

On March 17, 2021, the towing vessel Miss Dorothy was pushing 14 barges upbound on the Lower Mississippi River, north of Baton Rouge, La., when a fire broke out in the engine room. The eight crewmembers aboard briefly attempted to fight the fire but were unsuccessful and evacuated to the barges. No pollution or injuries were reported. The vessel was declared a total loss at $2.4 million.

Shortly after midnight, fire alarms began to sound in the pilothouse and throughout the vessel. The pilot saw smoke that “grew in intensity very quickly” and flames coming from the starboard main engine in the engine room. The crew attempted to use fire hoses and handheld extinguishers to fight the fire. Shortly after, the chief engineer activated the ventilation shutdown and pulled the emergency fuel oil shutoff for the fuel tank that supplied the starboard main engine. However, air continued to be drawn in through open engine room doors and open or broken windows, and the shutoff valve remained open because the shutoff did not function as intended. The fire continued to grow despite the crew’s efforts. The captain ordered the crew to abandon ship, and the crew was rescued by a Good Samaritan vessel, which then secured the tow against the bank. The fire was extinguished several hours later by first responders and crew aboard the Good Samaritan vessel.

Regulations for towing vessels state that “piping and machinery components that exceed 220°C (428°F), including fittings, flanges, valves, exhaust manifolds, and turbochargers, must be insulated.” Investigators found that the exhaust header leading from the individual cylinder heads to the exhaust manifold in the Miss Dorothy—which were subject to temperatures greater than 428°F (often higher than 600°F)—near the suspected origin of the fire were uninsulated. NTSB investigators concluded it is likely that the uninsulated exhaust header acted as an ignition point for the atomized or spraying diesel fuel.

The NTSB determined the probable cause of the engine room fire was the ignition of spraying diesel fuel from a main engine’s fuel system onto an uninsulated section of the engine’s exhaust system. Contributing to the severity of the fire and damage to the vessel was the inability to effectively secure ventilation to the space and fuel to the affected engine.

“Uninsulated engine exhaust surfaces can provide an ignition source for flammable liquids that can easily develop into fires that are difficult to contain,” the report said. “Towing vessel owners and operators, Coast Guard marine inspectors, and third‑party organization (TPO) towing vessel examiners should be aware of these dangers and fire risks and should regularly and thoroughly inspect equipment to ensure that measures are in place to prevent flammable liquids from coming into contact with hot surfaces.”