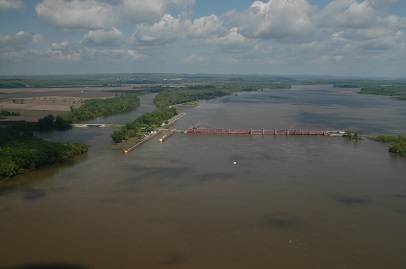 The U.S. Army Corps of Engineers will use $732 million in federal infrastructure funding to modernize a lock and dam on the Upper Mississippi River that are crucial for shipping grain and soybeans to export markets, officials said on Wednesday.

Upgrading infrastructure is essential for the United States to maintain its place as a top global agriculture exporter, as competitors including Brazil have made improvements.

The Army Corps will design and construct a lock replacement at Lock and Dam 25 on the river in Winfield, Missouri, about 50 miles north of St. Louis, according to a work plan. Opened in 1939, the system is well past its 50-year design life.

Nearly every bushel of soybeans and corn shipped along the Mississippi River from Illinois, Iowa, Minnesota, Missouri and Wisconsin pass through Lock and Dam 25 to export facilities near the Gulf of Mexico, said Mike Steenhoek, executive director of the industry group the Soy Transportation Coalition.

The lock chamber measuring 1,200 feet by 110 feet to be built at the site will cut the transit time for a typical 15-barge tow to 30-45 minutes from two hours, he said.

“A second lock will provide needed resiliency and redundancy, allowing a key link in the supply chain to remain operational if one of the lock chambers was closed,” Steenhoek said.

The Upper Mississippi River System transports more than 60% of America’s corn and soybeans and has suffered disruptions due to infrastructure problems.

In May 2021, Mississippi River shut to vessel traffic near Memphis, Tennessee, because of a bridge fracture, causing a backlog of more than 1,000 barges.

The Army Corps allocated funds for the project from the Infrastructure Investment and Jobs Act. It will also spend $97.1 million on environmental restoration at Lock and Dam 22 near Saverton, Missouri, officials said.