US, China Reach 31% of Phase One Commitments in 8 Months -BIMCO

In the first eight months of 2020, value of the trade of the commodities included in the Phase One agreement between the U.S. and China reached 30.9% of the total commitments under the agreement, says shipping association BIMCO. The goods are separated into three categories, with manufactured goods closest to reaching the target (36.4%), agricultural goods next (28.8%) and energy goods last (17.4%). The share of commitments reached is measured in value terms, as these form the basis of the agreement.

August was the strongest month of the year, with exports of all the goods included in the agreement reaching their highest level since November 2017 at $7.1 billion. 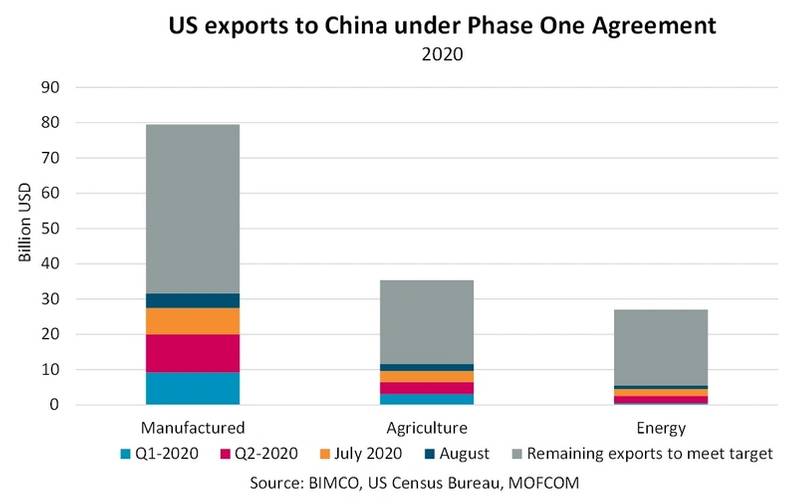 Exports from the U.S. to China of the two other categories of goods have on the other hand fallen, albeit only slightly from their 2017 levels: export of the manufactured goods is down 2.8% while export of the agricultural goods is down by 6.9%. In total, trade of all the goods included in the deal is down by 2.1% from the first eight months of 2017.

“The fact that trade of the goods included in the agreement is far behind the commitments is not surprising. The targets were unrealistic, even when the deal was signed before the pandemic. However, the Phase One agreement marked the first non-escalation of the trade war, and so far, the agreement has managed to return the trade levels to levels close to the status-quo of 2017, restoring much of the volumes that were lost in 2018 and 2019,” says Peter Sand, BIMCO’s Chief Shipping Analyst.

“With exports of these goods picking up in the past few months and the U.S. soy bean season, which started on September 1, likely to boost agricultural exports until the end of the year, progress on the agreement may pick up in pace but will not be able to meet the targets.”